This Week’s Storyteller is…

Doug Fallin, Shores UMC, St. Augustine
Wilbur’s Conversion—Stewardship in Action
Wilbur was age 69 when his doctor announced to him that he had Stage 4 lung cancer.  How long he had been in denial is uncertain, but Wilbur had developed a hoarseness in his voice long ago.  He had even quit smoking, a habit that had been with him most of his life.

I stopped by his home to see him when the bad news was made public.  He said he picked up a pack of cigarettes when he left the doctor’s office, reasoning that he had cancer already and “couldn’t catch it now.”

I asked Wilbur if he had a church family to help him through the days of chemo and radiation that the doctor had prescribed.  He pulled aside his shirt to expose the port that had only hours before been placed in position.  He answered in a quiet, hoarse voice that he did not; that he had never been much of a church person.  I felt the freedom to recommend a personal relationship with Jesus Christ…that I had found that it helped me to avoid some sleepless nights when life was not easy.   His wife and grandson entered the room and she shared with me that adversity was no stranger to their household.  Their daughter had been diagnosed with cancer at age 13 and died two years later.  The nine year old grandson’s father had been killed in an accident only a couple of years before.  That was when another member of the family nudged my hand from underneath the table, and I introduced myself to Wilbur’s little dog, named Willie in honor of Willie Nelson.  I noticed that his left front leg was totally missing. 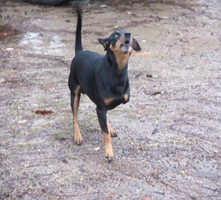 As I was leaving his house, I recalled that a friend of mine pastored two Methodist churches in that general area.  I called Dr. Dan and asked if he would visit Wilbur for the specific purpose of presenting the Gospel to him and offering him an opportunity to accept Jesus in his life.  Dan agreed.

Only a week or so later, I received a call from a very excited country preacher.  He had been by Wilbur’s home and Wilbur had accepted Christ.  With joy in his voice, he told me how he had prayed all the way to Wilbur’s house that God would help him to avoid small talk and beating around the bush.  He wanted to tell him about Jesus and give his the opportunity to be saved.  He did just that and since Wilbur’s voice wouldn’t allow him to pray audibly, Dan told him that he would pray a prayer of repentance for him if, and only if, Wilbur totally agreed with everything he said in the prayer would say ‘Amen’ at the end.  Dan said that with tears streaming down his face, Wilbur almost shouted a hearty “Amen.”

I stopped by to see Wilbur again the day before Thanksgiving 2014.  He said in a low and raspy voice, “Doug, I want to be baptized.”

As I drove away with little Willie barking in the background, I called my preacher friend once more and asked for another favor.  The next Sunday afternoon, there was a baptismal service in Wilbur’s home and joy filled the air.  Even Willie was happy.

March 29, 2015
Wilbur Update
I called Wilbur’s home last evening at 7:27.   His brother Johnny told me that Wilbur had gone to heaven just three hours before.  Now, I don’t know how you, the reader, feel about this, but I am so, so thankful that Dr. Dan Williamson was faithful to his calling and to the Great Commission.  The Holy Spirit had prepared Wilbur’s heart for that visit by the South Georgia preacher, and he accepted Jesus Christ as his personal Saviour.

Mary Negron, Memorial UMC, Fernandina Beach
The disciple shares her testimony about how even small acts of hospitality and caring—praying, sharing a meal with a stranger—contribute to the Great Commission.