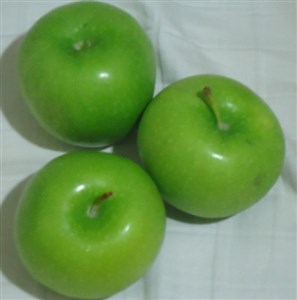 There are several steps in this, but the flavor explosion is worth it!

Cook Time:  20 minutes
Level: Difficult (only if you make your own pecan topping)
Yield:  6 servings

Salad:
1 apple chopped (not part of the original recipe but I added it to replace some of the chicken quantity and flavor)
1  bag of vegetarian chicken pieces [original recipe called for 1 (3-pound) apple-wood smoked chicken (Smithfield or Nueske)]
4 ounces Gouda cheese, placed into freezer for 2 hours
4 ounces pepper jack cheese, placed into freezer for 2 hours
VARIATION: I just used a slice of Monterey jack for each serving instead of the Gouda and pepper jack
6 cups mixed baby greens, iceberg, and romaine, stems removed, torn into bite-sized pieces and dried in a salad spinner
(We had fresh leaf greens and arugula from our garden)

Directions:
If you don't use the shortcut of prepared nuts:  Mix corn syrup, sugar, water, and salt in a heavy saucepan. Stir over low heat until sugar dissolves. Heat until a candy thermometer registers soft ball stage, about 238 degrees F.(I just eye it....) Remove from heat and stir in pecans, vanilla, and cinnamon. Turn out on waxed paper and pull pecans apart while cooling, being very careful to avoid getting burned! Refrigerate until chilled.

Through the feed tube of a running blender add, 1 at a time, vinegar, juice, salt, pepper, and thyme, and leaving the blender running, add the oil in a slow thin stream. Set aside until needed. OR hand whisk the lot--it works.  Into the freshly whisked dressing I added the chopped apple so that it could absorb the dressing flavor.

Fry the chicken pieces and chop bite-size. (Original recipe says: Pull chicken away from bones, and cut into thin strips.) Set aside until needed.
Cut the cheese into small strips/sticks.  (Original recipe says: Use a vegetable peeler to peel several curls of cheese for garnish and then use a box grater to shred cheese.) Toss chicken, greens, shredded cheese and pecans with enough dressing to coat. Garnish with curls of cheese.