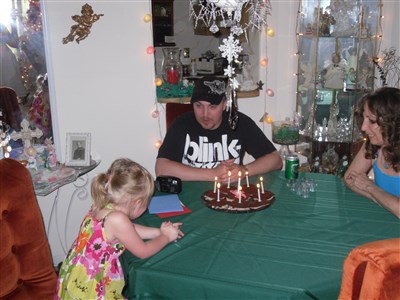 ....Pies. I had not spent a birthday with my son in 10 years or ever seen his first child except in pictures. Colorado to Florida is a long ways. He came to visit my parents and me on his 28th birthday with 3 year old Gwyneth. It was also Mother's Day that year. Only request he made was for Maine Whoopie Pies so he could show his child one of his favorite Maine desserts. It is a recipe handed down to generations in loving families. And even though I spent nearly 30 years in Maine and am not a "Mainer," I love 'em too. Sam was born there. He became a Calvary Scout in the US Army and did a tour in Iraq. This was a very important time for us, as he had returned safely from that tour and was paying respect to his grandfather Rev. Charles McAuley, who was a WWII veteran and had flown on 3 missions over Germany. Also seeing his favorite Grammy Mc and having her say to him "I like your tatoos" (how she always was to everyone that did something a little different) made him smile. Because we are also Scots-Irish you see the tiny mug lasses to be filled with, nope not beer, but soda for celebration. I am also in pic as Gwyn's "Grammy Sue." If I could, I would have included a generation picture.....another Maine tradition.

Filling  (Be daring and try adding fresh Maine wild blueberries or your own fruit or flavor. It's all about Yankee Ingenuity and since I am a bit of a Rebel, being different!)

Beat until light and well creamed.
Anytime you can cook with your grand kids is special. They love to get messy and are sure to enjoy their finished treat.
Even the youngest can help with the filling and lickin' the spoons clean!