It was a very full and busy week, and I was exhausted by Saturday morning. In fact, I could not remember being this tired.

We had had a three-day cabinet retreat, which was great. I had spoken to a group of 100+ young adults, had a day trip to Atlanta and then spoke to the Western North Carolina Conference on Saturday morning. Bob Tuttle and I arranged to have lunch on Saturday. I spoke from 9:30-10:30, went back to our place, changed into casual clothes and planned to take him to my favorite barbeque restaurant in Waynesville (Haywood Smokehouse), North Carolina, near Lake Junaluska. There were some things I wanted to talk to him about, and some things he wanted to talk with me about. Bob Tuttle has been my spiritual director and we have read the Bible together over extended times. We met years ago—he is an elder in the Western North Conference—but he has also had a profound influence on many in the Florida Conference as a professor at Asbury Theological Seminary. 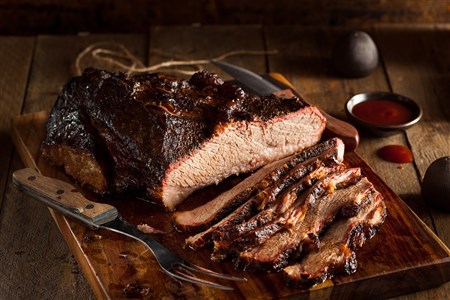 So, I picked Bob up and took him to the restaurant. It was crowded; it always is. We were open to the first available table. It turned out to be outside, in the shade. This was okay. It was a big picnic table that could seat six. We sat down on one end. I was looking forward to a personal conversation, maybe even with some confession.

Then the waitress came over. “There is a man over there, by himself, and he was actually before you. Could he sit at this table?” We said sure, and we meant it. But inside I was wondering, "Will we be able to talk?”

So, the man came over and turned out to be friendly. He runs a small construction company in Asheville. Bob and I talked about someone we both knew in Florida, but then we got back to including him.

"Are you married?" Bob asked him. He was, he said. His wife was the great blessing his life. "Do you have children?” They are adults; he talked about them. We talked about our wives and children.

Then, later Bob asked about his work. He talked about it.

“It's a beautiful day," the man said. It truly was a beautiful mountain day. “You’re right,” Bob said. “A friend of mine made this day!” We all laughed. The man said, “You are right.”

And then our food came. BBQ brisket. The burnt ends. I highly recommend them. Bob asked him, “Do you go to church?” He did not, anymore.

Bob listened. By now the guy knew we were ministers. He had apologized for drinking a beer, and we told him no problem. There are bigger fish in the world to fry.

We talked some more.

Then Bob asked him, “What would it take to get you to go back to a church?”

And he talked about the internal problems that had led him to leave the church, a Baptist church.

"And your wife is the greatest blessing in your life?" Bob said to him. He nodded and smiled. “Absolutely," he said.

Bob then said, “I am going to pray for you for thirty days.” By now Bob knew the man’s and his wife’s name. And had his phone number to text him.

"I am going to pray for you for 30 days. You will find a church because you can do this for your wife.”

Then the man said, “I think you and my wife are connected in all of this.”

“Your wife and I have the same friend,” Bob said, with a big smile on his face, like he was letting us in on a secret.

And I said, “I don’t think it was an accident that we were seated together today.” And he said, “Absolutely right.” He was smiling.

Then he said, "The five years I was in church were the best five years of my life. I read the Bible every day.”

We talked some more and finished most of our meal.

Then the bill came. Bob said to me, "I am going to get your lunch.” And I said, "Only if I can get his.” And the man said, "This has turned out to be a pretty great day!” To which Bob said, “It will be a great day if you and your wife can worship together in a church. You can do that for her, right?” And he said, “Yes, I can.”

I told him that he had done more for us than we had done for him. And I thanked him for eating with us. We shook hands, and said goodbye. He walked to his truck. There was a smile on his face.

We went inside to pay the bill. Bob ended up paying for all of it.

Oh, the man’s name was Steve. His wife’s name is Diane, same name as Bob’s wife.

The conversation Bob and I were going to have could wait for another day.

One benefit from reading this is that when you are there you should order the burnt ends of the brisket. They will bring them, but you have to ask.

I do have a lingering question:

Who was the stranger who joined us when we sat down to break bread together at the Haywood Smokehouse?