Disaster Recovery Missions and Outreach Next Generations
May 09, 2019
By Joey Johnston and Rev. Stuart Bodin | FLUMC

When you think about church mission trips, the destinations that often come to mind are mostly third-world countries, places impoverished beyond description, communities that lack all of life’s essentials.

In a way, though, the teenagers entered an apocalyptic new world, hopelessly forgotten and rendered practically unrecognizable by a historical path of destruction.

“I have been on a lot of mission trips,’’ said Rev. Stuart Bodin, pastor of Miami Lakes UMC. “But I’ve never had a better experience than this one. It was remarkable to feel the Holy Spirit in action and experience that level of faith and love.’’

Their destination was Mexico Beach, an idyllic spot in Florida’s Panhandle. But last October, it was ground zero when Category 5 Hurricane Michael made landfall with 160 mph winds and gusts surpassing 200 mph. According to the Federal Emergency Management Agency (FEMA), the community was “wiped out.’’

Coincidentally, a woman in Bodin’s Miami Lakes congregation had a Mexico Beach home, and its roof was severely damaged. She asked for help. Bodin’s congregation also had a retired roofer, so the pastor took him to the Panhandle.

They took a look at the house and did some roof repair. Then Bodin, strictly on a lark, wandered over to the First United Methodist Church of Mexico Beach. The windows were blown out. The doors were hanging by a thread. Rubble and debris were everywhere.

“On any other day, I probably would’ve checked it out and kept going because it was pretty desolate,’’ Bodin said. “But on this day, a woman was standing outside.’’

It was Carol Bonanno, a church trustee.

Bonanno: “What do we need? A lot. We need electrical work. We need plumbing work.’’

That could’ve ended the conversation.

Bodin thought for a moment.

After two more preliminary trips—including a cleanup and power restoration in the one-toilet, one-sink, zero-shower fellowship hall, where the Miami Lakes group of 27 (17 kids, ten adult chaperones) would stay for the week—it was time for the 600-mile journey and sweltering days of hard labor.

At one point, the Mexico Beach church had nearly 5 feet of standing water in its halls. All the church records were destroyed. About 70 percent of the church’s members have fled the area, probably never to return. Their homes were reduced to piles of rubble. Overtaxed insurance policies won’t come close to replacing them.

“We are starting over,’’ said Rev. Jerry Arhelger, pastor of First UMC of Mexico Beach. “I have traveled all over the world. I have seen a lot of disasters. But I’ve never seen anything like this.

“Most churches might experience a moment where some of their people are affected by a fire or storm. Our whole church was affected. Homes were gone. Lives were lost. All the lights were out. Trees were down everywhere. You had to go 80 miles to get out of the debris. You can see where people’s hope is severely tested.’’

“The Miami Lakes group has been a great miracle from the Lord,’’ Arhelger said.

There was a significant cleanup. New skill sets were learned with power tools. Sheet rock was installed. There is going to be a return trip, but now there are realistic expectations that the congregation can return to their building for regular worship services by the summer.

Apart from the heavy-duty work, there was bonding and fellowship.

The Miami Lakes and Mexico Beach church members worshiped together and gave thanks. They put on a talent show. They had a beach bonfire (a new concept for the Miami kids, who joked they’d be arrested if they tried that on a Dade County beach).

“We really had a blast,’’ Bodin said. “We tried to give them a sense of enjoying life a little bit. We had some incredibly passionate worship experiences. It was all a great thing because they have certainly been through some rough times.’’

Arhelger can attest to that.

Nearly two years ago, he was diagnosed with Stage 4 non-Hodgkin’s lymphoma, 60 percent of which had seeped into his bones.

“The oncologist told me I was going to die,’’ Arhelger said. “I told him he was going to die (eventually), too. He talked about my life expectancy, and I told him I don’t remember seeing an expiration date on my body.

“Basically, I’m a walking miracle. I’ve done all the right things (to sustain health), but it was tough with the hurricane. I was close to five weeks without power. I didn’t have some things I needed to eat. But you know what? The Lord gives you what you need. We have all been wounded. We have all been blessed.’’

Arhelger said he only needs the memory of the hurricane’s aftermath and the help the area has since received to feel positively.

Bodin has witnessed a big change, too.

“Bleak would be a good word to describe it,’’ Bodin said. “Desolation. Everything flattened. The first time I was there, it was so gray and dark and dirty. The piles of trash were so high. It smelled bad. No (bathroom) facilities at all. If you didn’t get gas before you got there, you had to pray you could get to Panama City.

“I can’t imagine what the people have been feeling. It was like going to a war zone. The depression has been pretty thick. But they are pulling together. There’s a sense of, ‘What are we going to do next?’ It was rewarding to be a part of that.’’

Bodin said some of his youth-group members wept openly during the worship services. Many came home saying they had been forever changed.

“There were moments when being around the folks in Mexico Beach was the epitome of joy,’’ Bodin said. “They were just so real and Christ-centered. To do God’s work was empowering for us. Now the kids are like, ‘What can we do in our neighborhood?’ Our church is on fire.

“I think we got more out of this than the folks in Mexico Beach did. We’re the ones who got blessed.’’

—Joey Johnston is a freelance writer from Tampa. Rev. Bodin is pastor of Miami Lakes UMC. 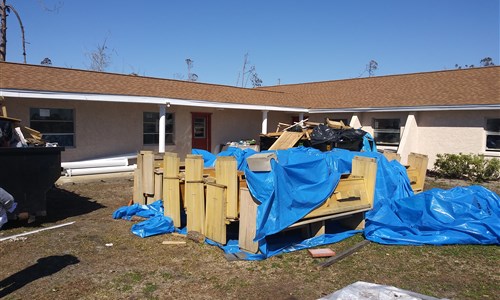 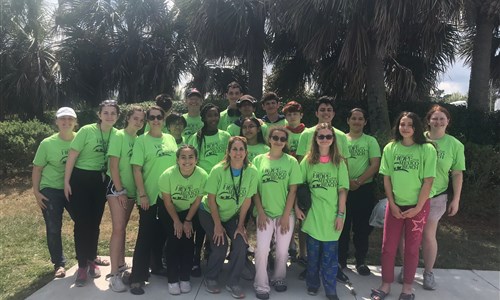 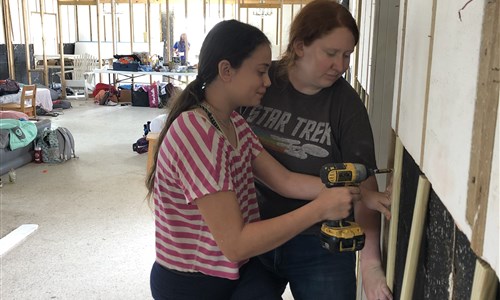 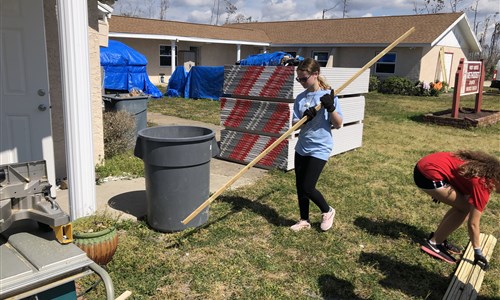 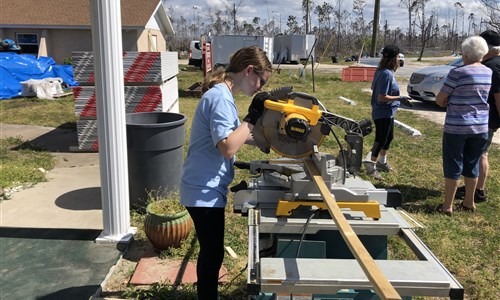 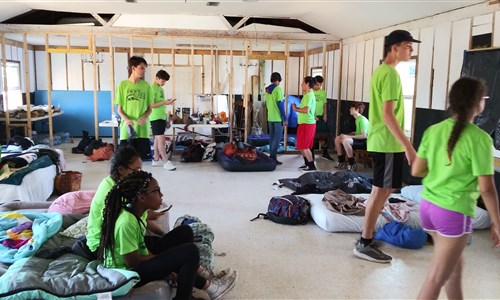 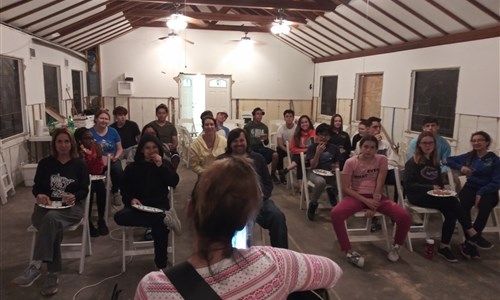 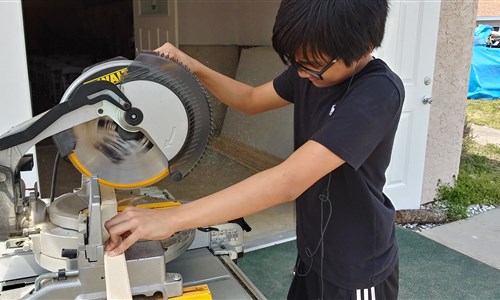 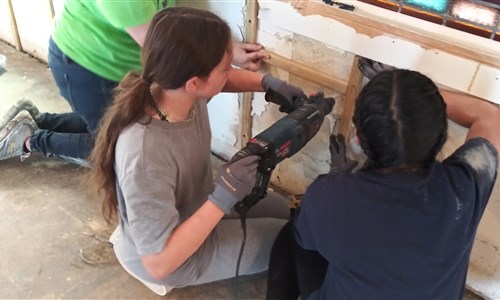 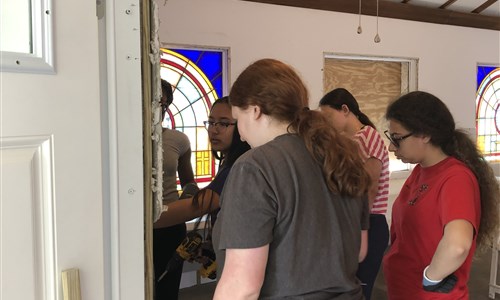 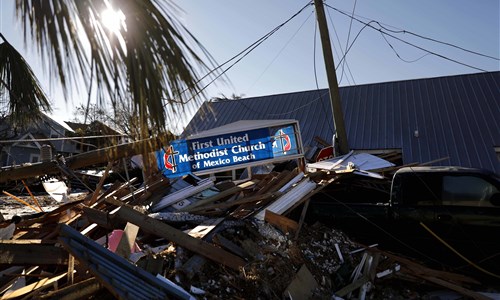