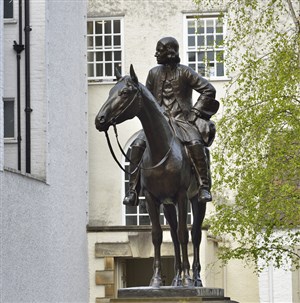 During the 18th century, John Wesley traveled more than 4,000 miles annually and preached approximately 40,000 sermons during his lifetime, according to a profile by Christianity Today.

And, in those days, horsepower was not a metaphor.

A few Anglican priests, such as his brother Charles, also participated in the fledgling ministry, but John did most of the preaching. The overwhelming schedule eventually forced him to rely on lay preachers.

Since 2012, The United Methodist Church also has had a certified lay speaker program.

The roles of lay ministers vary widely across the Florida conference, and they depend on the discretion of each church pastor. If asked, they can help to pastor a church.

Pastor Eddie Fulford of First United Methodist Church in Dunnellon is a strong advocate for lay ministers, Groom said. He trained four and has been approved to train two more.

Montverde UMC in Central Florida is another example. Lay servanthood was healthy and ready at this church when it was going through a transition with interim pastors.

About two-thirds of that church were certified lay servants. They filled the pulpit and started a couple of ministries because of the training they received.
Lay minister duties

Lay ministers are encouraged to work with their pastors, Groom said. Some occasionally preach at the pastor’s discretion and do a good job.

Pastors in some churches may invite lay ministers to preach on fifth Sundays, during pastors’ vacations or on special occasions. Other pastors may choose to handle most of the preaching and other pastoral duties rather than hand them over to lay ministers and lay servants.

“Lay ministries can be particular to an individual church, or it can be a part of what (churches) feel called to do in their community, in their outreach, in their missions,” Groom said.

Certified Lay Ministers (CLM) serve to enhance the quality of ministry, much like the class leader did in early Methodism, through service in the local church.

A CLM, as part of a ministry under the supervision and support of the clergy, conducts public worship, cares for the congregation and assists in many other areas of leadership.

It’s important for laity to prayerfully recognize their spiritual gifts and go to their pastor and see where they can work together to find a healthy fit, said Lynn Campbell, lay servant ministries co-director for the East Central district.

“We can do more harm to people if we go in unprepared, ill-prepared, uninformed, misinformed. It is to everyone’s advantage and to the health of the ministry of the church as a whole if we have the right tools.”

Lay ministers don’t just go from the pew to the pulpit. To undergo training, they must first secure approval from their pastor, church and district superintendent.

After training, lay ministers must first serve as lay servants. In Campbell’s district, certified lay servants also undergo advanced training, geared toward the needs that applicants discover for themselves and their churches.

“They’re ready,” Campbell said. “They are committed to coming in and spending those hours learning, growing and having the experience and knowledge to impart. The opportunity is there for churches to make use of them.”

Ronald Coleman, North East district director of lay servant ministries, took the basic course to be a lay speaker in the mid-1990s.

“Many folks would love to be involved in lay speaking, and that’s a part of what we do, speaking at our own churches or, as needed, speaking at other churches or at different events throughout the district,” Coleman said.

“It’s our job as the directors in each district to get the word out to all of those who are interested in becoming a part of the process.”

Campbell said not all lay servants are meant to be preachers.

“They can be Sunday school teachers and Bible study leaders and small-group leaders because they have the energy to undergo advanced training,” he said. “They are ready to go back and lead prayer groups and things like that.

“The truth about having trained laity is it frees up clergy to do their main stuff. They can concentrate on visitation and sermon writing. You have all these helpers who can take some of that burden off of them.”

For more information, go to FloridaLayServants.com or BeADisciple.com.

—Ed Scott is a freelance writer based in Venice.