Editor's Note: The Florida Conference received a $50,000 grant from The United Methodist Church’s Young Clergy Initiative program in 2014 to help develop training in personal finances and stewardship for aspiring clergy members. Click here for that story.

John Barclay III interned last summer at Brunswick United Methodist Church in Crystal, Minnesota, closely watching its pastor and other staff, while doing a lot of ministry himself.

The college sophomore had been feeling a tug toward seminary and becoming a United Methodist pastor. The internship — one experience in particular — sealed the deal.

“I got to preach, which absolutely confirmed that call,” Barclay said. “It was an amazing opportunity.” 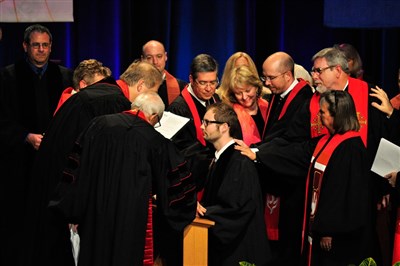 General Conference 2012 in Tampa, Florida, agreed to spend $7 million to create the Young Clergy Initiative, and made clear the program should run 12 years.

When delegates to General Conference 2016 convene May 10-20 in Portland, Oregon, they’ll be asked to keep the Young Clergy Initiative going another four years at the same funding level.

The Rev. Kim Cape, top executive of the United Methodist Board of Higher Education and Ministry, hopes delegates will take heart from stories like Barclay’s and keep faith with the Young Clergy Initiative.

“It’s become a kind of leverage for us to demonstrate to young people that we care about them, and we want them to connect the call they hear to The United Methodist Church,” she said.

The concerns that prompted the Young Clergy Initiative and so much other reform legislation at General Conference 2012 included the graying of the United Methodist clergy corps in the United States.

The Lewis Center for Church Leadership, at Wesley Theological Seminary, sounded the alarm a decade ago with a study showing that in 2005 the denomination had 850 ordained elders under age 35 – down from 3,219 in 1985.

Since then, the number has grown modestly (all the growth is among women; the number of young male elders is down), but young elders still constitute under 7 percent of the total. The most recent Lewis Center study found the median age of United Methodist elders remains a record high 56.

The denomination has seen a shift toward licensed local pastors, who are not required to have a seminary degree. Don House, an economist and church growth strategist in the Texas Conference, warns that baby-boomer retirements — already underway — threaten a shortage of elders and a bleaker future for a denomination that has long been shrinking in the U.S.

“They will be retiring at rates we have not seen,” House said. “As a result we have to recruit young clergy to take their places.”

In approving the Young Clergy Initiative, General Conference 2012 delegates gave administrative responsibility to the Board of Higher Education and Ministry, which promptly convened a young clergy summit.

What emerged was a strategy of inviting grant proposals broadly related to cultivating more young clergy.

“We tried to distribute as many (grants) as we could, to as many projects as we thought were viable and hopeful,” said the Rev. Trip Lowery, the board’s director of Young Adult Ministry Discernment and Enlistment.

The agency funded 78 of 164 grant applications, touching all five jurisdictions, with most awards running from a few thousand dollars to $100,000 dollars. Though General Conference 2012 approved $7 million, the amount disbursed was about $5.5 million, since expenditures depended on apportionment payments to the World Service Fund.

The largest recipient — $600,000 in three separate grants — was Project Transformation, in which young people discerning a call to ministry work with low-income children on reading and other education skills.

The higher education and ministry board decided that was warranted to help the program go national, given its record in helping kids and families while also exposing young people to ministry, often in a United Methodist church context.

The Minnesota Conference got $60,000 for The Eli Project, which put Barclay and others in paid summer internships at United Methodist churches. The goal was to give young people a “backstage pass” to pastoral ministry, said Joelle Anderson, project manager.

Of the first class of eight interns, six are graduating from college this year, and four of those are headed to seminary. Two were solid in their plans for ministry before the internship, but two others went from interested to committed, said Anderson.

She added that the Young Clergy Initiative funded just one year of The Eli Project, but the Minnesota Conference was impressed enough to decide, during its annual meeting, to find the funds to keep going.

Cape, of Higher Education and Ministry, noted that the Young Clergy Initiative encouraged grant recipients to seek funding from other sources, and they did— to the tune of $6.8 million.

“The significant amount of matching money indicates to me that there’s great passion and excitement about this in the church,” she said.

The higher education and ministry board has put forward no statistics showing the program has boosted the number of clergy candidates, saying it’s too early.

“Many of the young people in this initial phase, they’re teenagers,” Cape said. “We won’t know outcomes for years.”

The Rev. Kenda Creasy Dean, a United Methodist elder and professor of youth, church and culture at Princeton Theological Seminary, supports the Young Clergy Initiative and agrees it’s unreasonable to expect clear results so soon. But she thinks the Young Clergy Initiative should give fewer and bigger grants, focused on programs proven to draw young people to seminary and pastoral ministry.

“Find your high impact producers … and invest like crazy in them,” said Dean.

Dean has had a role with two Young Clergy Initiative grants, including one called the New Ministry Apprentice Program. She said it gives seminarians a chance to “test drive” pastoral ministry by serving— in teams of two — a United Methodist church that can’t afford a full-time pastor.

While grateful for the grants, Dean was surprised at how little follow-up paperwork was involved. She thinks the Young Clergy Initiative needs more oversight.

“With small grants, a lot of paperwork is a huge deterrent, but with larger grants, we can expect more fruit and more accountability to go with it,” she said. “Watching over each other in love is a Wesleyan practice.”

Lowery said the higher education and ministry agency will be working to be more strategic with grants over the next four years, and to provide more oversight, including on the timeline of funded projects.

The Rev. Adam Hamilton, pastor of the 21,000-member United Methodist Church of the Resurrection, was among those pushing General Conference 2012 to invest more in young clergy.

Hamilton said he was disappointed that the Young Clergy Initiative didn’t include direct financial support for those struggling to pay off seminary debt. Some conferences with high rates of young clergy, such as Texas and Alabama-West Florida, have targeted programs for that.

Lowery said the board considered taking on seminary debt, but concluded the Young Clergy Initiative wasn’t well enough funded to make a big difference there while also trying to support programs for getting young people into ministry.

Hamilton appreciated the $75,000 Young Clergy Initiative grant his church got to put on the Young Preachers Festival.

“Those are the kinds of things that I think help to energize and inspire young people to pursue ordained ministry, or if they are in ordained ministry already, to be more effective,” he said.

Asked whether he’ll be backing another four years for the Young Clergy Initiative, Hamilton didn’t hesitate.