Fighting hunger is a connectional effort

Fighting hunger is a connectional effort

Workers scurried from station to station, filling bags with grain and other food items until a runner weighed them and seals were applied.

The scene was from last May at Plantation United Methodist, as volunteers from there, Davie UMC and Merrell UMC, Lauderdale Lakes, joined forces in a highly successful cross-congregational mission effort.

The result—45,144 meals to be shipped through Stop Hunger Now to needful communities in Burkina Faso, West Africa—illustrates what is becoming an annual trend at United Methodist congregations in South Florida.

“It kind of brings it home more when you're a part of something like that,” said Nancy Gibson, the mission chairperson for Plantation. “By bringing the congregations together, you put everyone in the same room and you talk and have fun and you're doing something good at the same time.”

With a membership of 1,200 and average Sunday attendance of 450, it made sense for the larger Plantation church to host the one-day event. Plantation first participated in 2014 after Gibson attended the 2013 General Conference and was introduced to a meal packing event as part of the broader “A Million Reasons” campaign. She returned to Plantation with a goal of raising $2,500, which would pay for 10,000 meals. The congregation far exceeded the goal and responded with $11,300 in donations and more than 200 volunteers who packaged 49,500 meals that went to Haiti.

Although Plantation didn't participate in 2015, it took a different approach in 2016 by reaching out to smaller churches to get involved. Associate pastor Kathy Nolasco touched base to gauge interest at Davie UMC and Merrell UMC and each responded enthusiastically. The joint effort of the churches then went on to come up with an extra $2,000 which they decided to contribute to Stop Hunger Now's clean water initiative. The money purchased water filters so that 250 in the West African nation could be assured of cleaning drinking water for 10 years.

The success of the food packaging effort for Stop Hunger Now by Davie UMC was important to Pastor Zig Bays and his self-confessed “passion for feeding ministries.” The church—membership 320 and average Sunday attendance of 160 during two services—has for years taken part in a ministry that takes monthly hot meals to a homeless shelter in nearby Hollywood. Because Davie has been enforcing increasingly strict zoning regulations against the homeless, a feeding ministry unencumbered by local ordinances was ideal, according to Bays.

When Nolasco reached out about the opportunity at Plantation, Bays began recruiting in earnest. “We began encouraging our youth to go,” Bays said. “We had a wide age range, families with kids, some in their 80s to the youngest at 12. Folks in the church who hadn't done it in the past (being involved in ministry), that was the exciting part of it.”

Bays lauded Plantation for coordinating the effort. He noted the importance of connectedness, both at Davie and in the entire United Methodist community. 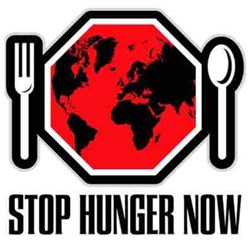 “This is a great visual of being connected,” he said. “Davie on our own could never have done (close to) 50,000 but in a connecting moment, you bring churches together and allow them to be a part of that and that's a great representation of the kingdom of God.”

Like Davie UMC, Merrell's feeding efforts previously had been primarily local. Pastor Bancroft Williams noted the church's existing food bank and bread basket distribution to homeless and lower income individuals. Williams, whose church averages 250 for Sunday services, said he has been pushing the church to expand its work.

When he heard from Plantation's Nolasco, he sensed an opportunity to do so. When he announced the effort, 25 signed up – and by the day of the event, that number had doubled.

“We had a lot of enthusiasm,” he said. “We have a broad age range from elementary school aged to older adults. It went right across the generational gap and was a wonderful experience.”

The experiences shared by the three churches have made each eager to participate again. Bays said Davie may look into doing two events in one year so more people can be involved. Gibson spoke of the importance of Plantation’s participation in a hands-on activity for Methodists from different churches.

“When we had the three churches together, it was so neat,” she said. “It was neat to see it.”

Williams said he anticipates Merrell enthusiastically participating for many years to come.

“We reignite that enthusiasm to serve in that way,” Williams said. “They were connecting more with doing the work of Christ. They feel happy to know they could be used to be the heart and mind of Christ beyond the church walls.”