Collective is firing up the 'nones' and 'dones'

Collective is firing up the 'nones' and 'dones'


In a former newspaper office building in the middle of DeLand, Fla., Christ is at work in a coffee house atmosphere where musicians play and the passion of a thirty-something pastor fires up the “nones” and “dones.”

Also known as the unchurched and the dechurched, the nones and dones are people of all different backgrounds and spiritual experience. They may never have attended church or tried it and gave up on it. Now, they are gathering weekly in a Fresh Expressions-type church called the Collective. It’s led by Pastor Ben Collins, a licensed local pastor working through the ordination process of the Florida Conference.

The non-traditional church is part of First United Methodist Church, Deland, and was started three years ago by Collins and Senior Pastor Owen Stricklin, who recruited Collins. Pastor Ben was ordained in the Baptist church and, when recruited, was leading a non-denominational congregation. When his work came to Stricklin’s attention, Stricklin saw that Collins was reaching people that First Church had been hoping to reach.

In three years, the congregation has more than doubled and all metrics for tracking a healthy church have increased, such as attendance, giving and professions of faith. “Many (of the congregation) are not self-identifying as Christians,” Collins said in the church’s YouTube video.  “We are different people from different backgrounds.”

Each Sunday night at 5 p.m., there is a 15 to 30-minute message, coffee and music by secular bands in a large, open room.  Communion is offered at the end of each service.  Many in the congregation had previously turned away from organized religion, disenchanted and disappointed in the traditional church, Collins said. His aim is to show these “dones” that God is about love and acceptance no matter what.

Stricklin’s congregation had been dreaming for years of creating an extension church.  “The church spent several years visioning, trying to connect with a demographic that no other church in the area seemed to be able to reach,” Stricklin said. “I knew of Ben’s work with the marginal congregations. People who have one foot in the door and one foot out and the people he was trying to reach.” 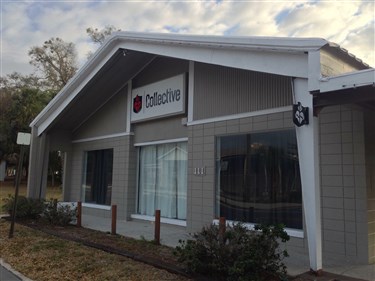 The First Deland congregation raised the money to purchase the building worship space and covered many of the startup costs, as well. Though the two congregations don’t worship together or spend much time in the same activities, they still feel connected, Stricklin said.

The Collective is an example of the Fresh Expressions movement that began just a few years ago in the Florida Conference. Fresh Expressions is “a form of church for our changing culture, established primarily for the benefit of people who are not yet members of any church,” according to Bishop Ken Carter’s blog on the movement.  It became an initiative in Florida in 2014 “as a way to come up with new ways to experience Christ in Community with others,” according to the Bishop’s blog.

The Collective’s small operating budget is now almost completely self-sustaining. A recent pledge drive produced 120 people supporting the church financially, 95 percent through online gifts. Attendance has grown from 30 people to now more than 70 each week in the building and 117 subscribers to their YouTube live feed and chat. There are also satellite gatherings in Orlando and St. Augustine of people who join in via YouTube each week.

When the Collective first began, it was geared toward the younger generation, but quickly the demographics have expanded to all generations.  “My vision was to build a congregation on the threshold,” Collins said.

“Ben is culturally attuned to people who have been bruised by the church,” he said. “He is in sympathy with them.”

“What I grasped very quickly with Ben—nothing that he does is theologically light,” he said. “Listening to Ben preach, you hear a lot of theological depth.” Jackson also attributes the success of Collective to Stricklin, who recognized Collin’s value, brought him into the United Methodist denomination, and now shares the mission field with him.

“It is a real statement of Christian humility,” Jackson said of Stricklin and his congregation.

Stricklin says that the model they have created in Deland can be duplicated by other churches and pastors, with a few caveats.

“Look at your community with fresh eyes and look for those who are not being served by a church in the area,” he said.  “Fresh eyes, though, is what is important. If you’re looking at it from your own reality, you may see what you want to see and not what is there.”

A missional approach, being obedient to God and where He is leading, and being able to laugh through the challenges helps a great deal as well, he said.

For more information on the Collective, visit their webpage at http://www.wearecollectivechurch.com.

Julie Boyd Cole is a freelance writer from Gainesville, Fla.