When William Joyner was growing up, he couldn’t stop drawing.

​He drew on everything. Sometimes he would tear out the blank “flyleaf” pages of books to use as sketching paper because he didn’t have the money to purchase art supplies.

“I would draw on anything I could find,” he said. “I just didn’t have a lot of materials.”

These days, Joyner, a church and staff member at United Methodist Church of the Palm Beaches, is supporting himself by working as a church custodian who also happens to be an artist. 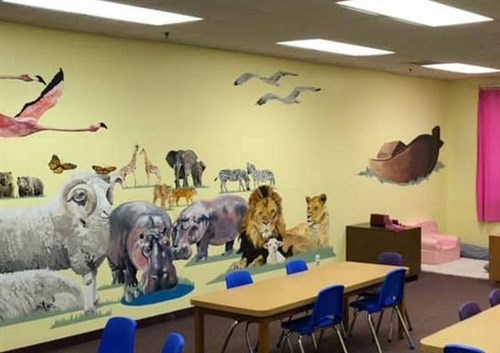 His spiritual gifts are visible throughout the campus and in a variety of ministries. Recently in a children’s classroom, he painted a mural that is roughly eight feet high and 15 feet wide so that three- to five-year-olds can visualize the story of Noah’s Ark.

Asked by Children’s Director Kate Marr to create the mural, Joyner began by talking to the children themselves. He asked them what kind of animals might have been on the ark and what animals they wanted to see in his drawing.

“The children gave him a list,” said Kay Brand, Sunday school teacher for the pre-k to kindergarten age group. “They had just about everything on the list, right down to dinosaurs and insects.

“Every week, while the mural was underway, the children would come into the classroom eager to see which of the animals William had painted that week. They were really excited to see the project evolve.”

To be sure, there are lions, tigers, and bears in the painting. Also, there are two fish in a pond, two monarch butterflies in flight, and sure enough, two dinosaurs walking in the distance because Joyner decided he just couldn’t leave them out.

The mural covers almost an entire wall of the pre-k to a kindergarten classroom. But, in addition to its size, it can’t be missed because of its realism, use of light and color, and the basic happiness that seems to emanate from the painting.

Like the animals in the famous Edward Hicks’ painting “Peaceable Kingdom,” the lion is pictured as lying down with the lamb. But in Joyner’s painting, there is an extra note of fun. He has given the nod to his adopted state of Florida by prominently displaying two pink flamingoes and two seagulls.

“Happiness is really important,” Joyner said. “I want this drawing to speak to children and to make them happy as they learn about God’s love for all living creatures. I want the animals to look happy.”

Joyner’s inspiration comes from many sources, including children’s films, photos of animals in the wild and from the works of legendary artists like Norman Rockwell and Disney animators.

Now that the church is such a big part of his life, he likes to create paintings that have Christian themes and has collaborated with Senior Pastor Patti Aupperlee in a discipleship class called “Paint and Parables.”

The class meets at the church parsonage. Aupperlee leads the spiritual discussion, and Joyner teaches participants how to draw a simple sketch to illustrate the parable. Most recently the group studied the parable of the lost sheep.

During the holiday season, Joyner created a painting of the manger in Bethlehem on stage while Aupperlee was preaching.

When she did a sermon series on animated films, Joyner once again created artwork to illustrate the sermon’s message.

“People come by the church and see that I have created something,” he said. “Next thing you know, they are coming to ask me if I can draw something for them.”

Joyner is particularly delighted by his contacts with the children and hopes he can encourage them to express their creativity in whatever area they most enjoy.

This year he was asked to be a presenter when the church presented  Bibles to the children. He sponsored a child who has an interest in art.

“I gave him his  Bible and a sketchbook,” Joyner said. “I hope I can inspire him to have confidence in his own artistic talent.”

According to Pastor Aupperlee, the church became aware of Joyner years ago when the youth were involved in a feeding ministry at a downtown church. Joyner, who was homeless at the time, had a sketchbook and was always drawing.

“Our youth director recognized his talent,” she said.

These days, Joyner is gainfully employed, and his talent is appreciated. “Everything has changed since God showed up,” he said.

His sideline career has become a ministry.

—Suzanne McGovern is a freelance writer based in Orlando.