Why are manger scenes so strange?

Why are manger scenes so strange? 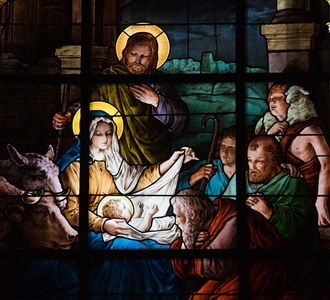 Figures in nativity scenes are pretty weird, aren't they? This is true of most manger scenes, whether we’re talking about the ceramic one under a tree or the statuesque one in a church or the plastic one on a lawn. First off, there’s Mary, always looking very fresh and calm and full of reflection — which is quite impressive considering that she just gave birth without any sedative. Then there’s Joseph, doing some kind of man-thing off to the side — holding a lantern or a large stick. He looks totally composed, too.

And there’s the baby Jesus with a full head of hair, wide-open eyes and arms outstretched like he’s ready to belt out a song.
Not to ruin anyone’s Christmas spirit here, but what the heck?
If our manger scenes were realistic, Mary would be recovering from a painful labor full of sweat and blood, with a look on her face that’s anything but serene. And Joseph — wouldn’t he be a nervous wreck, too? His hand too shaky to hold a lantern?
And about that newborn. Shouldn’t he be red-faced and screaming? Eyes clenched closed and wisps of hair stuck to the top of a head that‘s still odd-shaped from all the squeezing?
Instead, we’ve sanitized and romanticized it. We’ve removed all the blood and sweat and tears and pain and goo. It’s no longer something real. We’ve left out all the messy parts. The oh-my-God-what-now parts. The I’m-screaming-as-loud-as-I-can-because-it-really-hurts parts. The oh-no-I’ve-stepped-in-the-animal-droppings parts.
The real parts.
Our manger scenes depict a far different story than ones written 2,000 years ago. Those old stories tell of a young couple that’s been disgraced by questions about the baby’s father. The grand moment comes in a place nobody would choose to bring a baby into the world. A bunch of shepherds are the first to hear the news. Dirty shepherds — among the lowest people in their society. Religious outcasts because they couldn’t observe the purity rituals while working in the fields.
And this baby grows into a man who hangs out with all the unsavory folks in his society. The ones that the religiously observant people call sinners. Poor people. Dirty people. Rough people. All sorts of social and economic outcasts. He even turns fishermen — some of the roughest and lowest people in his world — into his closest friends and followers.
And that’s what Christmas is about, Charlie Brown.
It’s not about a calm-faced mother and a lantern-toting dad with a perfect baby stretching out its arms to the world. It’s about us as we really are. Bleeding and screaming. Covered in goo and disgrace. Aware of our many failings and falling-short moments. Coming apart. Barely holding it together. Unable to explain why we make such bad choices so many times.
So, here’s an idea. Let’s replace those plastic manger scene figurers with something more real.
With what?
With us. You. Me.
Because really, we’re the ones who should be there. We’re the ones who understand what all of this is like — blood, sweat, pain, confusion. Just another day in our lives, no?
And not only that, we’re the ones who need to cozy up to the manger to be saved. Yes, saved. Saved from thinking we should be like those plastic figures. Saved from thinking that our messy lives are somehow not good enough. Saved from our moments of despair. Our self-loathing. Our inclination to give up. Saved from our pervasive and numbing indifference. Above all, saved from thinking that we don’t need to be saved.
We’re like the alcoholic at his first AA meeting. Once we state our name and what we are, the healing can begin. The redemption process can get rolling.
That’s what Christmas is about.
We acknowledge our brokenness, and God responds with a kiss on our sweaty faces and goo-covered foreheads. Reminds us that even though we make mistakes and bad choices, we ourselves are never a mistake or a bad choice. Instead, we are always a chosen miracle. And when we feel totally broken, that’s when we’re the most beloved. Always. Each of us. Just as we are.
Like the dirty shepherds who were invited to see for themselves, or the rough fishermen who were called to be followers and friends, or the young couple who found themselves parents of a child without respectable explanation for its parentage, we are all part of an ongoing and endless process of redemption.
And limitless love.
So go ahead. Take your place in the manager scene. You belong there. In fact, offer to hold the baby for a while and maybe even take him for a walk. His parents will be grateful for the break. It’s been a long night. This redemption stuff is exhausting.
But you already knew that, didn’t you?
Courtesy Sojourners Magazine www.sojo.net. Photo courtesy Bigstock. The opinions are those of the author and do not necessarily reflect the position or policy of the Florida Conference.