Leading in the age of the image

Leading in the age of the image

Our age is one of profound transitions -- global, cultural, digital. We are on the move, and our daily lives are increasingly marked by significant new patterns of thinking and relating and being in the world.

There are many striking things about these changes, but perhaps none quite so striking as the role images now play in our individual and collective lives.

Reality has never before been visually shaped to the degree that it is today. Images are of unprecedented importance to our entire society, and their virtually ubiquitous reach is likewise unprecedented. Unless we intentionally get away, we are almost never outside a space dominated by images -- whether that space is as small as an iPhone screen or as large as the mall or an airport.

Partly because it is a brand-new change -- relative to the long view of history -- and partly because it’s a complex topic, we have not thought enough about the move toward a visually dominated daily life. But Christian leaders need to be thinking about images. As Rich Mouw and Andy Crouch observed in the Seminary of the Future report, we live in the age of visualcy.

We have all seen Christianly inspired art (or at least Christian kitsch). Scenes from the Bible, doctrinal truths, liturgical practice and so on have shaped artistic production for nearly two millennia. It was not always so.

In fact, we have no evidence of any Christian art until after about the year A.D. 200. And even then, the initial attempts at art were tentative or cautious -- five loaves and two fish in a catacomb, a faceless shepherd with a sheep on a sarcophagus. Jesus himself was not depicted until well into the fourth century.

This overall development toward a Christian artistic culture illustrates something of its Jewish roots. With some exceptions, Jewish tradition around the time of the New Testament did not engage in robust artistic production. Most of all, Jews did not portray God. Even the Gentiles knew this about the Jews: the Roman historian Tacitus, for example, notes that in stark contrast to regular pagan practice, the Jews conceive of God with their minds alone and set up no images of their God in their cities or temples. The reason for the rejection of images was simple: imaging God was a violation of the second commandment, or, more simply, idolatry.

When Christians began seriously to produce art, they did so under the conviction that in the incarnation God had made a statement about the importance of matter. The material world could be used to depict the saving acts of God -- and God the Son himself -- precisely because God had assumed and redeemed human nature. The second commandment was not violated, because God had imaged himself with the stuff of the created world.

Of course, Christians then vigorously debated (and frequently fought about) how best to understand such depiction: whether icons were legitimate forms of artistic representation, whether images of any kind were to be allowed in church, whether we could depict God the Father and the Holy Spirit or only the Son and so on.

All this history evidences a thoughtfulness about the power of images that most modern Christians would scarcely understand -- a deep care and concern for the way art can or cannot mediate God, for what is proper to God’s nature and what isn’t, for the fact that images themselves can conscript our imaginations, for the power of the everyday world of visual representation for both good and ill.

It would be too easy to offer well-known truisms about images and stop there -- that women ought not to take the measure of their bodies from advertisements, that men ought not to learn what manliness is from superhuman athletes, that children ought not to be subjected to inappropriate material and so forth.

The problem with such advice is not that it’s untrue; it’s indubitably true. The problem, rather, is that such advice fails to address the deeper work that images do.

A recent study, for example, found that there is no distinct area in the brain that corresponds to “aesthetics” or “art” or “images.” The primary area of the brain activated by the arts is, rather, the same area that lights up when we’re determining what’s useful for survival (what kind of food to seek, what mate to select, what’s painful and what’s not and so forth).

Such a finding is profoundly important, because it suggests that our response to images is in part a response to things we’ve learned to think we need to survive. We do not necessarily need a new shirt to survive, but precisely because images activate our sense of survival, we learn to associate them with needs as deep as survival. Therein lies both their promise and their peril. Where the need for survival is real, images lead us to life. And where the need for survival is false, images fool us and tempt us wrongly to believe that our life depends on our connection to them.

Though neuroscientific studies of the effect of images have not been around until very recently, Christians have always known that images are as powerful as our need to survive. Indeed, Paul uses the same word for image -- eikon -- to speak both of Christ as the saving image of God (2 Corinthians 4:4; Romans 8:29) and of the idols that lead us astray (Romans 1:23). Images can tell us the truth about God and thereby connect us to the only source of life, Paul implies, and they can lie to us and lead us down the path of destruction and death. Of course, not all images do this in an obvious or immediate sense, but life-death is nevertheless the range of their power.

The difficulty with images, then, is that their connection to our survival is both life-giving and deadly dangerous. How do we learn when it’s one and when it’s the other? 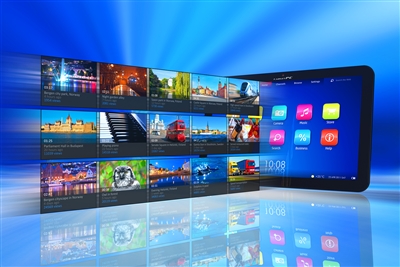 We learn a tradition of reflection that can catechize our imaginations. Philosophers of art such as Ernst Gombrich, as well as novelists who ponder it deeply, like Chaim Potok, tell us that there’s no such thing as images without tradition. What they mean by this, in part, is that even our seeing -- what we see and how we see -- is learned. The rich history of Christian reflection on images cannot be learned in one day. But for leaders who must reckon with the contemporary age of the image, there are at least three things they must notice as they begin to think hard about the place of images in their life and work.

First, contrary to our contemporary sense that images are inert, Christian reflection on their power has repeatedly discerned that images are in fact more powerful than we are. They are often our masters, and not we theirs. Living in a world of images is not so much like living among things we can choose to make our own; it is, rather, more like living in a world with things that can make us their own.

Second, images can be idols, the kind that bind us to themselves and shape our lives accordingly. Swastikas and the like immediately come to mind.

But there are other, more subtle ways images seduce us and make us theirs. Take the sort of thing we see on Facebook, for example, where we can witness virtually countless posts of happy moments, milestone celebrations and intact relationships. For such things we should give thanks, of course.

But where are the pictures of those moments when we act like idiots to our spouses or kids, shoot an air ball for the potential game winner, royally embarrass ourselves at work, enter a cancer ward, go to AA, receive devastating news or otherwise genuinely hurt from the pain of life?

By themselves, the merry pictures combine to tell a story about human happiness that is not only false but also enticing and ensnaring. We begin to think life ought to look the way it does on Facebook. But if the Christian story is true, the story of happy moments as the full story of human life is a lie. The collage of images of only one sort finally lies to us about what kind of creatures we are and where we can put our hope.

Finally, images can create the space for growth in discipleship. It would be hard to condense aesthetics into a one-line answer to “What’s good art for?” But for Christians, the answer would necessarily relate to growth in our lives as Christians. (Art for art’s sake is as meaningless a slogan as it is unrelated to Christian existence.) For Christians, images grow us in at least two indispensable and powerful ways.

Images have the power to tell us the truth when we’d rather not know it. It was essential, to take a well-known example, that images of the Nazi treatment of the Jews be shown in the face of unbelief and denial. With technological innovation, the manipulation of photographic images has made things more complex, of course, but the capacity of these images to tell the truth has not been weakened. More difficult to discern, perhaps, but not weakened.

The lure and importance of photographic/videographic reporting has always been to show the truth. We may not have needed images to learn that human beings will behead other human beings -- the guillotine was very busy in its day -- but the very fact that they can confront us in our living rooms is a forceful reminder of the human predicament and the need for Christian hope.

Images can also directly show us the work of love incarnate. The images of Maggy Barankitse and her work in Burundi in the wake of the slaughter of the Hutu/Tutsi civil war help us actually see what love looks like in the world we live in. It is one thing to read Maggy’s words, “Love made me an inventor.” It is quite another to see how love actually works. It is one thing to hear that war orphans who swim in a pool are swimming in water that cleanses their souls. It is quite another to see a cleansed soul playing in the water with joy. Images usher us into an imaginative space that gives visual shape to the truths we so desperately need to know.

Visual art engages the human being in a way that works against the common separations of modern life -- between thinking and living, between work and home, between public and private.

The eminent man of letters George Steiner once wrote, “Great works of art pass through us like storm-winds, flinging open the doors of perception, pressing upon the architecture of our beliefs with their transforming powers” (“Tolstoy or Dostoevsky,” p. 3). Among other things, Steiner meant that images can transform the way we are in the world. The Eastern Orthodox Church, of course, believes that this transformational power can be known through icons. But even those who would not share this belief can understand the truth of Steiner’s remark.

Images in the sense of true art participate in the transformational power of God’s hallowing of creation. Even if such participation seems distant -- powerfully reminding us, say, of our desperate need for transformation rather than its completion -- the images themselves usher us into a place where our vulnerability to their power works for our good, and we begin to heal.

Courtesy of Faith & Leadership www.faithandleadership.com. Photo courtesy Bigstock. The opinions are those of the author's and do not necessarily reflect the position or policy of the Florida Confernce.