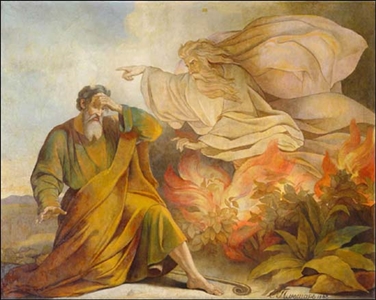 Recent comments made by actor Christian Bale ignited a controversy over how Hollywood portrays Bible characters. Bale, who plays Moses in Ridley Scott’s upcoming Biblical epic Exodus: Gods and Kings, told reporters at a press event that while preparing for the role, he read historical accounts about the Hebrew leader, including the stories in the Quran, Bible and Torah. Bale said,

I think the man was likely schizophrenic and was one of the most barbaric individuals that I ever read about in my life. He's a very troubled and tumultuous man and mercurial. But the biggest surprise was the nature of God. He was equally very mercurial.

Unsurprisingly, many Christians took issue with this. Faith Driven Consumer, the group that campaigned against the film Noah (before it even came out), fought to reinstate Duck Dynasty after it was pulled from cable following Phil Robertson’s controversial comments about homosexuality and has taken on numerous other pop-culture causes, soon posted their thoughts about Bale’s character analysis. They warned that his comments “cast serious doubt on the hope that the Old Testament story of Israel’s deliverance from slavery in Egypt will appeal to Faith Driven Consumers any more than Darren Aronofsky’s Noah did.”

It’s important to note, no one has actually seen the movie yet. But like with Noah, that doesn’t seem to matter.

They weren’t alone in their criticism of the comments.

Sure, the suggestion that Moses was mentally ill is not exactly a conventional historical view, but other parts of his statement aren’t that far-fetched, especially when made by an actor known to go to extreme lengths to get inside the head of characters. As other writers have noted, Moses was an extremely flawed guy. Not only did he murder someone in a vengeance-fueled rage, he also was not allowed to enter into the promised land because of his disobedience to God. "Mercurial" seems pretty accurate.

In some circles, Bale’s comments have cause more of an uproar than when films like Exodus display a concerning lack of diversity—even when depicting a variety of ethnicities.

But, even if Bale’s comments do reflect creative liberties with the character, and concerns about the Biblical accuracy of the film are legitimate, we need to be careful. With this situation, and situations like Aronofsky's rock monsters and other creative liberties, the common refrain is that Hollywood is changing the Bible. This, of course, is not accurate. The Bible is unchanged.

There’s no indication that Scott is a religious individual, so we should not hold him—or anyone else in Hollywood making Bible movies—to the same standards as we do Christian scholars or pastors. These movies aren’t biblical commentaries or sermons. They’re entertainment. They are stories told by professional storytellers concerned with tension, dialogue, character development, action and sub-plots, not documentaries about ancient texts.

When movies like Argo play fast and loose with the facts, they draw thoughtful criticism from historians, as well they should. In such cases, critics and experts realize that, in making a movie, Hollywood has designed a conversation piece, and it's one they can and should join. Outrage is the incorrect response.

The recent string of Hollywood Bible epics (Scott is working on one about the life of David as well) were never meant to be replacements for the source material. Christians looking for accurate accounts of what Scripture says have the actual Bible. There’s no reason to be threatened by a filmmaker’s take on Biblical stories, because nothing they can do will ever change the Scripture or the truth.

If Christians want to better understand how pop-culture voices and tastemakers view their faith, these movies—featuring some of Hollywood’s biggest stars and most acclaimed directors—are a perfect way to do it.

In a recent feature in RELEVANT magazine, published before the release of Noah, Dr. Craig Detweiler, professor of film at Pepperdine University, explained that the Bible movie trend is a major moment in American pop-culture: “This moment of Hollywood’s renewed interest in the Bible is really a historic crossroads and opportunity for Christians. This is far more than an olive branch that has been extended to us. This is multi-million dollars of investment to the faith community’s prolonged cry that ‘If you film it, we will come.’ And if we fail to show up, then we absolutely have no ground to ever complain again to this generation of Hollywood execs.”

These movies may not get all of the details right. They may not offer a perfect presentation of the Gospel. They may not even represent traditional Christian values. But what they do offer is an opportunity to engage. They offer an invitation to talk about the Bible and share traditional Christian perspectives—but first we at least have to be willing to listen to ones different than our own.

Courtesy Relevant Magazine www.relevant.com. Photos courtesy wikicommons. The opinions are those of the author and do not necessarily reflect the position or policy of the Florida Conference.