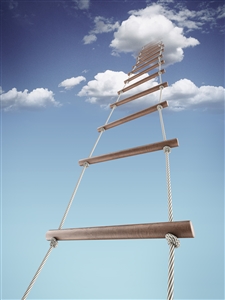 When people think of your church, what comes to mind? Is your church seen as similar to other churches? Different? How would church members answer those questions? How would others in the community respond?

For example, toothpaste would be one such product ladder. On a toothpaste ladder, there would be literally hundreds of different brands and types of toothpaste. In the marketplace, people generally only think of four to six brands of toothpaste, despite the availability of hundreds. So if your brand of toothpaste is far down the ladder in sales, one option is to work harder and hope to advance a rung or two.

However, there is another option, namely to begin a new ladder for which you can be the best and most-known representative. That is what the soft drink 7Up did years ago. 7Up has been around since 1929; and by the end of the 1940s, it was the third largest selling soft drink in the U.S.  As years went by, 7UP found itself in a much more crowded soft drink marketplace. So in 1967, they decided to get off the soft drink ladder and, in essence, started their own ladder — the UNCOLA ladder — one that consumers would most associate with them.

So, do people in your church and outside tend to think of your church as one of many churches, or do they associate your church with something distinctive — not because your church is better than other churches but because it has an identity and purpose that are distinguishable? Here is an example.

A church located in a mid-size city with about 100 churches, including a dozen of their denomination, saw itself as a church for those living nearby, particularly those who share their denominational heritage. The church was stable but had shown no growth for many years even as the surrounding population grew with an expanding local economy. For quite a while, a staff member had wanted the church to offer a “healing service.” Others were skeptical, being unfamiliar with such services and associating the concept with television preachers claiming healing powers. The advocate had seen healing services meet important needs for people in other congregations.

Finally, the church agreed to have a one-time healing service. A weeknight time was set, and a printed announcement appeared in the bulletin and in a list of free services in the local newspaper. No other mention was made. Bulletins were prepared for 20, though most assumed far fewer would be present. Seventy people attended! Fortunately, church leaders skeptical of the service from the beginning looked more deeply at what all this meant. It turned out that their city had become quite a regional medical center that had drawn people with a heightened interest and concern for health and healing, either as practitioners or recipients of health care.

In time, this discovery led to the church creating a new ladder for itself around health and healing. It turned out that they were already doing many things connected to this theme. There was a parish nurse program, meals for the homebound, exercise and weight-loss classes, addiction ministries, smoking cessation classes, and many more. Now they put all they were doing under the banner of a church “seeking God’s wholeness of body and spirit for everyone.” They started an annual Lenten mid-week luncheon series on health and healing designed especially for health providers of the city. No longer did they see themselves or did others see them as one of 12 churches of their denomination or one of 100 churches of the community.

But the UNCOLA example has its limitations. It worked well for 7UP for many years. But things change internally and externally. They went through many ownership changes, suffered from a limited distribution network, and saw the aging of those attracted to the brand in the 1970s and 80s. Also, while UNCOLA set them apart, can you live forever known for what you are not?

But that’s the danger of all visioning, including that by churches that emerges out of the spiritual discernment of paying attention both to its mission and to its context. The journey to serve God in a way that fits your congregation and context evolves and changes. It is not your task to develop a church identity that will last forever, but one that is right for today and can be a foundation from which newer manifestations will emerge in the future.

Courtesy Lewis Center for Church Leadership www.churchleadership.com. Photo courtesy Bigstock. The opinions are those of the author and do not necessarily reflect the position or policy of the Florida Conference.