Like everyone else in Laredo, Texas, last May, Michael Smith heard all the talk about what was happening in town. Every day, dozens of Central American mothers with children were showing up at the downtown bus station, left there by U.S. Border Patrol agents after being arrested and processed for immigration violations. They spoke no English and were languishing, exhausted and hungry in an overcrowded terminal, with nowhere to sleep, eat or shower.

Then in early June, the phone rang in Smith’s office at the Holding Institute Community Center, a United Methodist-affiliated adult-learning initiative, where he serves as executive director. It was a bus-station employee. He sounded desperate.

“There are a lot of people here,” Smith recalled the bus-station employee saying. “The fire department is saying they’re going to have to close us down because of occupancy. We don’t know what to do.”

Smith explained that Holding was a community education center, not an emergency shelter, but the caller persisted.

Smith agreed to think about it, but it was already too late. 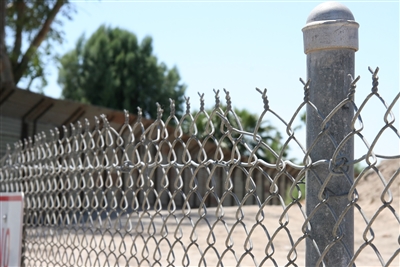 More than 20 immigrants were walking up the street to the center, which normally provides classes in practical English, computer skills and literacy instruction.

Smith scrambled to retrieve a stash of Army cots from storage and then enlisted his 12-year-old son, Matthew, to teach the immigrants how to assemble them.

“We bought them food at McDonald’s, we had some fruit, and we bought water,” Smith said. “That’s what we fed them the first night. And then we really didn’t know what to do, because the next few days, more people started to show up.”

With this whirlwind of events, Holding Institute Community Center was catapulted to the front line of this year’s immigration crisis along the U.S. border with Mexico. Since Oct. 1, 2013, the Border Patrol has apprehended more than 125,000 families and unaccompanied children, many seeking asylum as they flee gang-related violence in Honduras, Guatemala and El Salvador. Overwhelmed agents have released thousands of families at bus stations in Laredo and other cities with a “notice to appear” in court.

For Holding, the crisis forced an urgent dilemma. Should the nonprofit send the immigrants away and refocus on its primary mission -- teaching local residents the most basic and practical of skills? Or should it radically revamp its plans, at least for a while, to meet the humanitarian needs on its doorstep?

For faith-based organizations, the tensions between focus and flexibility are very real, said Maria Eugenia Calderón-Porter, the director of the Program for International Nonprofit Excellence at Texas A&M International University in Laredo.

“Everybody is afraid of breaking the rule or not adhering to the mission, because their funding gets stopped,” Calderón-Porter said. “But what happens in a crisis? Because I said I’d only spend it on books, I can’t spend it on food for somebody who’s starving?”

Ideally, nonprofits should have protocols in place to let them relax their standard benchmarks and adjust priorities in a crisis, she said. But Holding had no such formal provisions on the books and had to make decisions quickly.

Holding also had its own reasons to be cautious. After earlier incarnations as a seminary, a boarding school, a high school and finally an adult-learning center, the 134-year-old institution had only just reopened months earlier after falling on hard times. From 2011 to 2013, the center had been closed -- the result of low attendance, declining financial support and an unsuccessful effort to offer private day care. Having already experienced the consequences of mission drift, Holding didn’t want to make the same mistake twice.

But in the face of the crisis, Holding’s leaders did not hesitate. Soon after those first arrivals walked up the street from the bus station, the center called a community meeting in a classroom with 30 desks. The crowd was standing-room-only; 70 representatives showed up from Laredo-area churches and nonprofits.

“We just started thinking, ‘What are we going to do?’” said the Rev. Paul Harris, the pastor of Laredo First United Methodist Church and a member of Holding’s board of directors.

Holding agreed to be the primary place for showers and donated goods, with other downtown churches and faith-based nonprofits providing hot meals, medical care and case management.

Over the next month, Holding transformed itself from Laredo’s newly reopened, bare-bones center for adult education to a hub for addressing the border crisis. Volunteers would find immigrants at the bus station and get them to Holding, where they would reunite with friends, eat sandwiches and borrow cellphones to call relatives.

For hours, the immigrants would sit under the trees on the Holding campus, staffers said. After more than a week of sitting on floors, shoulder to shoulder, inside a U.S. Customs and Border Protection facility, they didn’t want to be inside any more than they had to.

Once systems were in place, the transformation was manageable. Visitors seldom stayed overnight; Holding found its niche as a day center. Kids played in a courtyard. Mobile shower units, furnished by an association of Texas Baptist men’s groups, doubled the capacity for showers at Holding. By mid-July, folding tables in meeting rooms were piled high with donated clothing and toys.

To make the relief work happen, Holding relied partly on adrenaline from its tiny staff, which included Smith, who works a second job to make ends meet, a full-time groundskeeper, who earns only about $200 a month, and a handful of teachers, who are paid a $250 monthly stipend for about 36 hours of work. Even so, employees were routinely on-site from 6 a.m. to midnight during the height of the crisis in June and July.

Holding staffers couldn’t do it all, but outside support came pouring in. A team of roofers from First Baptist Church in Athens, Texas, donated time and materials to repair a badly leaking roof. The United Methodist Committee on Relief sent 6,000 hygiene kits for distribution.

Help came from all directions. One day in mid-July, during a lull in new arrivals, volunteers worked together in 95-degree heat to sort clothes and build a new playground.

They included people from the charity Save the Children, two Mennonites from Pennsylvania, a Methodist from Iowa, two locals from a Hispanic Baptist church and a team of four from a Mexican Methodist congregation across the border in Nuevo Laredo.

Holding’s agile response has made an impression on Laredo, giving the nonprofit new confidence.

“The fact that they’ve been able to assimilate and support this crisis to the extent that they have will show them in a different light to the community,” said Calderón-Porter, the nonprofit management expert at Texas A&M International. “By managing it as a temporary crisis, Holding has seen itself from a new perspective.”

Holding now knows it is an organization that can deliver human services along with classroom instruction.

Institution with a big heart

As all the support suggests, Holding’s rapid-response outreach has put it on the area’s cultural map as an institution with a big heart, a capacity for nimble action and a timely mission.

Holding needed the boost. Just last year, before it reopened, roofs leaked, broken windows went unrepaired and thieves ransacked the place, Smith said. Today, much work still needs to be done, but Holding stands to benefit from its newfound prominence on the radar of local and national groups.

Though Holding has a local governing board and gets support from area groups and individuals, it depends also on yearly grants of $20,000 from UMW. Early this summer, UMW sent an additional $7,500 to help with migrant relief.

Holding’s work this summer is also attracting the attention of other denominational officials. In August, Hortense Tyrell, UMW’s executive secretary for national ministries, was preparing to travel to Laredo and meet with Holding’s board.

“We want to hear how we can be of further assistance to them as they respond to the immigration crisis,” Tyrell said. “Maybe we can further mobilize United Methodist Women to provide in-kind support … and see how they are progressing since they restarted their program.”

As a wild summer now winds down, Holding is still riding the wave of energy that comes from being at the center of a high-profile cause. But the crisis has been losing its urgency, with the number of new immigrants down sharply, from more than 100 a day in June and July to an anticipated 30 a week in late August.

Once the situation is resolved, Holding will have to address new issues and think through its future. If the nonprofit is now known for its rapid-response capacity, what happens after the crisis? Will it add relief work to its portfolio or return solely to its mission of community education? Will it again lose its footing and falter?

Smith is confident Holding can parlay its crisis-driven support into long-term partnerships. The investments in shower repairs, for example, won’t be wasted, even if immigration from Central America doesn’t surge again, he said. With an ample supply of cots and showers, Holding could soon accommodate church mission groups who could stay and work at the facility for a week or longer.

‘Plenty of work to do’

“Mission groups want to serve where there’s a need,” Smith said. “We have plenty of work for them to do.”

Holding has also bolstered community support by putting this summer’s relief work into the context of the nonprofit’s institutional history.

In a very real sense, Smith said, the relief effort was a reclaiming of the nonprofit’s broader mission to serve women and children in need -- not just through education, but also by attending to unmet health, wellness and social needs.

Under this approach, adult students can join a class even if they have missed the first session or two and then immediately apply what they are learning when they look for work the next day. More courses could be added soon, Smith said, including basics in the legal rights of immigrants.

Time will tell whether relief work joins adult education as a permanent part of Holding’s mission. But for now at least, the momentum is in Holding’s favor. Its new supporters believe that the institution has recovered its mission this year, not strayed from it.

“There’s an interesting lesson for me in this,” said Judy Kading, a United Methodist who came to Laredo from Greenfield, Iowa, to volunteer. “This space was, at a point in time, dedicated to service and dedicated to God, and people dropped the ball. They couldn’t handle it. The place closed. But God didn’t forget the pact.

“It’s like God said, ‘Well, there’s the Holding Institute! It’s still got a mission, and here it is!’ And human beings just have to go along with those purposes.”

Courtesy of Faith & Leadership www.faithandleadership.com. Photos courtesy Bigstock.com. The opinions are those of the author and do not necessarily reflect the policy or position of the Florida Conference.