Last July, three generations of my family went on an Alaskan cruise together. It was great fun, but as a lifelong landlubber, I had trouble using the correct seafaring lingo.

I kept calling our “cabin” a “room” and inviting family members to meet me on the fourth “floor” rather than “deck” four. And when it came to the more hard-core nautical terms like “starboard” and “port,” I didn’t have a clue. I usually just pointed.

Yet my biggest indiscretion -- and the one that drove family members crazy -- was my tendency to mislabel the vessel itself. Every time I called it a boat, my father would cringe. 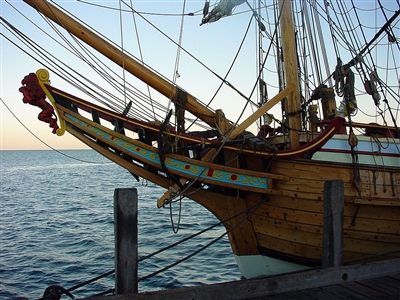 Using the proper word matters -- not only for sailors but also for followers of Christ. A boat, for instance, is a favorite symbol for the church. Like many other churches, the one that I pastor has a stained-glass window depicting a wooden vessel with a sail.

It is there to remind us of an ancient symbol for the church. Signifying a vessel of salvation, the boat was often used to portray the church. The old image still resonates in the word we use for the central portion of a sanctuary, the nave. The Latin word for ship is navis, and for boat, navicula. I think it must have been the latter -- a mere boat -- that the early church had in mind.

Whenever I look at the window in our church, I am always struck by how small the vessel is. We are meant to gaze upon that window and ponder how a church is less like the mighty vessel we call a ship and more like a humble boat with a mast and sail.

The church, as I have experienced it, is not a cruise ship. It’s just a boat -- and that is an important distinction for the church to remember. But size is not the only difference between cruise ships and the wooden boats of the ancient world. Here are five others.

First, people who travel by cruise ship are passengers -- a very passive role. All the important decisions and all the work are handled by others,  trained professionals called the crew.

Ancient mariners on a boat, however, were not passengers; they were the crew. Raising sails. Tying knots. Pulling oars. If they didn’t know how to do such tasks, they watched and learned from others. If they hoped to get anywhere, they had to share both the work and the decisions.

Second, passengers on a modern cruise ship all pretty much do their own thing. Some play shuffleboard, while others shop. Some stay in their rooms -- darn it, cabins -- and read, while others attend classes and lectures. Some swim, while others nap. 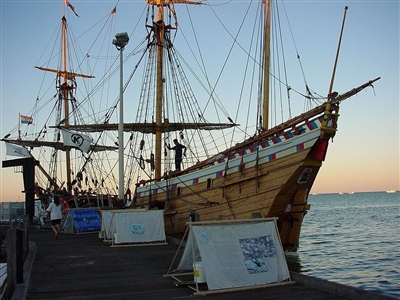 On a boat, it’s not like that. Raising sails and navigating by the stars takes not just work but teamwork. With no sonar or compass, ancient mariners carried ravens with them and released them into the sky. The crew would then assemble on deck (got it right that time!) and search the skies for signs of the black birds that would lead them to land. Ancient mariners had to learn to work together. Otherwise, they were -- quite literally -- sunk.

Third, passengers on a cruise ship dine at separate tables. They don’t have to mix much unless they want to.

On an ancient boat, everyone ate from a common table. They not only shared the food but worked together to prepare the meal and then clean up afterward. Mixing was not optional.

Fourth, modern passengers are entertained. In fact, the only mission of cruise ship passengers is to find ways to amuse themselves as they travel from port to port. They go to Broadway-style shows, watch movies or attend talks at the lecture hall, all in hopes of being entertained.

Those aboard an ancient boat entertained themselves. When the day’s work was done, they gathered together to share tall tales, true stories and bawdy jokes. How else could they get through all those long, dark nights as their boat drifted along?

Finally, fifth, it doesn’t take much courage to sign up for a cruise. Typically, the gravest potential dangers are gaining 10 pounds from the buffet or twisting an ankle on the dance floor.

In ancient days, however, the sea was terrifying. It was believed to be the one part of creation that had not been tamed by God. In an age when everyone believed in sea monsters and an earth so flat that you could sail right off the edge, it took guts to set sail in a creaky wooden boat. Ancient sailors had to trust in God and in each other.

Clearly, getting the words right matters. Yet many in the church today do not seem to grasp the distinction between a ship and a boat.

Sometimes, for instance, church members act as though the pews were deck chairs, a comfortable place to sit and watch while others teach children, study Scripture, visit the sick and befriend the poor.

Thankfully, the church is not a cruise ship. It is a boat where all can be transformed by working together.

Sometimes church members divide into groups, with children, singles, young and old adults each sequestered and doing their own thing. Sunday school classes often share nothing more than a hallway. Conservatives huddle on the starboard side; liberals gather on the port.

Thankfully, the church is not a cruise ship. It is a boat where all can be reconciled, trusting that our shared love of God is greater than our differences.

Sometimes church members forget that we are called not merely to coexist but to mix together in joyful fellowship.

Thankfully, we share a common table of bread and cup. There, we kneel together and receive from the same bounty of grace.

Sometimes church members act like consumers in search of entertainment, shopping around for prayers, snappy tunes and comfortable messages.

Thankfully, the church is a worshipping community united in purpose -- the glory of God. Volunteers come together to place the flowers, share the anthems and welcome guests, all with the understanding that in worship, we are not the audience -- God is.

Sometimes church members take their vows of membership lightly, as though church were just a pleasant social club or an easy weekly routine.

Thankfully, the church is a witnessing community, dedicated to making disciples -- and nobody can be a disciple without taking a few risks. Weekly, we remind each other that following Christ takes more faith, hope and love than any of us could muster on our own.

When it comes to the church, the stained-glass window has it right. It’s not a ship; it's a boat.

Courtesy of Faith & Leadership www.faithandleadership.com.  The opinions are those of the author and do not necessarily reflect the policy or position of the Florida Conference.