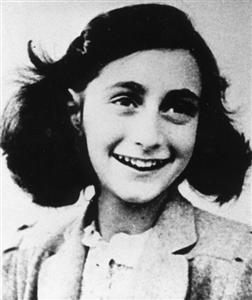 A Jewish teenager hiding out in Amsterdam has a powerful lesson for church communicators: Tell your story.

That teenager is, of course, Anne Frank, whose diary of her two years in hiding during the Nazi occupation is a remarkable work of literature that has captured the imagination of the world.

Her diary relates the terrors—and tedium—of living in hiding. It ends abruptly in 1944 when her hiding place is betrayed. Anne is sent to the concentration camps and died just weeks before the British liberation.

Anne Frank was one of six million Jews killed by the Nazis during the Holocaust. But as tragic as her life is, her story lives on. Her father survived Auschwitz and found Anne’s diary. Her father published Anne’s story and her words became a testimony against the Nazi atrocities.

All Anne did was tell her story. Sometimes there’s no braver act.

There are stories happening every day in your life, in your community and in your church. Follow Anne’s example and simply capture those stories. You don’t need to have any greater purpose.

No Thought of Glory

Anne never saw her diary as anything grand or important. It was a way for her to work out her feelings. She found strength in writing: “I can shake off everything if I write; my sorrows disappear, my courage is reborn.”

At one point the group in hiding hears a suggestion on the radio to collect Jewish diaries after the war and share a glimpse of what life was like. Everyone immediately thinks of Anne’s diary, but she doesn’t dwell on it. It’s as if she considers it a possibility, but then dismisses it and moves on.

No, Anne Frank’s diary wasn’t written for anyone but her. She sums up her feelings succinctly: “Sometimes I very much doubt whether in the future anyone will be interested in all my tosh.”

This group of eight Jews spent over two years in hiding during the Nazi occupation, never able to venture outside. They lived in constant fear of being discovered, relying on a network of friends for food and sanity. They read books and studied to stave off boredom, trying to find some semblance of normalcy in the midst of World War II and the Nazi genocide.

Through it all Anne Frank kept a simple diary. All she did was write down her story and she became a hero around the world.

Courtesy of Church Marketing Sucks www.churchmarketingsucks.com.  For more stories in the Church Communication Heroes series, click here.  The opinions are those of the author, and do not necessarily reflect the policy or position of the Florida Conference.