If anybody in America celebrates this Thanksgiving anywhere close to the way the Pilgrims did that first Thanksgiving way back in 1621, it probably will be the Duck Dynasty family of Phil and Kay Robertson.

No matter what bird - turkey, duck, chicken, quail- - is on the table, it is likely to be accompanied by deer, squirrel, raccoon, frog legs, crawfish or anything else one of the family shot or caught on or near their Louisiana acreage. Homegrown tomatoes, cabbage, potatoes, corn and berries probably will be on the menu as well.

Those who know the Duck Commander's story (told in his book, "Happy, Happy, Happy" with Mark Schlabach) are aware that, in his early life, even the bare necessities were scarce and self-reliance was a requirement. Phil and two of his four sons also had to overcome drug and alcohol problems associated with "honky-tonk life." 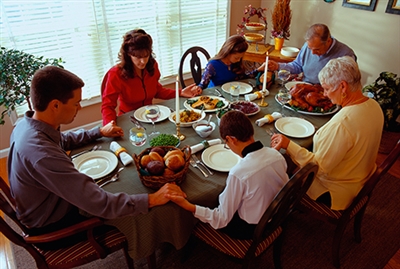 Yet their circumstances likely were not as harsh as the conditions faced by the Pilgrims in a strange land. They faced a winter of cruel weather following a difficult four-month crossing of the Atlantic Ocean during which the 102 passengers - including 34 children - squeezed aboard the "Mayflower" lost four of their number. An additional 17 of the Massachusetts colonists died within the first three months of their late November landing and supplies were scarce.

Spurred on by their desire for religious freedom, the newcomers struggled to build houses, plant crops and explore the territory, despite continuing hardships. But there was no activity on Sundays, scrupulously observed as days of worship and rest. These were the men who had signed the Mayflower Compact declaring that what they were undertaking was "for the glory of God and advancement of the Christian faith" (seldom mentioned in schools that seem adverse to any hint of religion anymore, in Phil's view).

Things began to change for members of the redneck Robertson clan as they built a hand-crafted duck caller business into a multimillion dollar conglomerate for which they declare their thankfulness. Hidden by the bib overalls or hunters' camouflage garb of the bearded men is the fact that several of those in the Duck Dynasty have advanced degrees. (Phil, a former teacher, has a master's degree in education.)

The biggest change came when at age 28, Phil, followed by the boys, came to know "Jesus Christ, son of the Almighty God, who washed away my sins, taught me a better way to live, and guaranteed my eternal inheritance." (Some of the women were way ahead of them.)

For their part, the Pilgrims were thankful for the seemingly miraculous appearance of Samoset, an Indian chief from Maine, and Squanto, a Patuxent brave. Both spoke some English, possibly picked up as slaves taken to Spain and England. The pair guided the planting of a bumper crop of vegetables and introduced the Pilgrims to the local Indian chief, Massasoit, who showed them where and how to hunt the animals of the area.

So with 90 Indians as their guests, the Pilgrims, not as straight-laced as often portrayed, partied for three or four days, eating heartily, drinking ale, dancing and playing games - one akin to cricket or stick ball. Of course, there was worship featuring prayers of thanksgiving.

Viewers of the Dynasty reality show on TV know the Robertsons like to party. Most are athletic and into sports. Phil was the starting quarterback on the Louisiana Tech football team when former Pittsburgh Steelers Hall-of-Famer Terry Bradshaw was his backup.

They also know not just a holiday banquet but daily family dinners begin with prayers of thanksgiving (over the objection of producers) as a regular feature of the series. All the Robertsons are avid Bible students. Three are ordained preachers, one a pastor.

According to his book, Phil believes not just the way they celebrate Thanksgiving but the faith shared by his family is akin to that of the early settlers and founding fathers.

"I'm right there with our founding fathers," he writes. "I'm a patriot and a Christian, and I'm moving forth with what they started...I may be the only man reading and quoting Scripture, carrying his Bible and blowing duck calls to crowds, but, hey, it has to start somewhere. It's what makes me happy, happy, happy."

Adon Taft was for 37 years the religion editor of the Miami Herald. He taught social studies at Miami Dade Community College. He retired to Brooksville, Fla., where he is a member of First UMC. He can be reached at adontaft@yahoo.com. The opinions are those of the author and do not necessarily reflect the policy or position of the Florida Conference.