Justice on the waterfront

Justice on the waterfront

Two years ago, in Hoboken, N.J., a woman in her late 60s who spoke little English and had even less money spent more than $1,000 on furniture. She thought she would use it for the rest of her life.

But when she was wait-listed for public housing, her move-in date was delayed and she was unable to take delivery right away. By the time she was ready to pick up her purchases, the store had resold her furniture to someone else.

After spending more than a year trying to get either her furniture or her money, the woman finally got help. It wasn’t a government agency, a consumer watchdog group or a crusading journalist who came to her aid last spring. It was a two-room legal clinic on the ground floor of a church parish office in Hoboken. 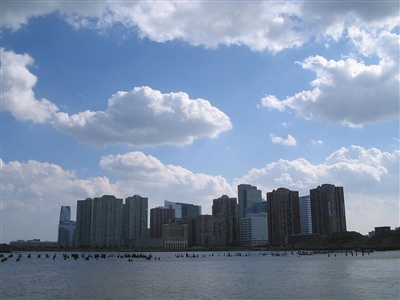 The woman became one of the first clients of the Waterfront Project Inc., a nonprofit organization supported by the Catholic Community of Saints Peter and Paul, a 125-year-old parish in the city that sits just across the Hudson River from the skyscrapers of Manhattan.

While many churches seek to help people, the Waterfront Project is a rare initiative. It’s an independent nonprofit legal clinic launched by a church and supported by members’ donations.

This project that offers legal answers grew out of the questions and concerns of a lawyer-priest, his parishioners and community members. The program is an example of a church bringing together the unique gifts of its members and the training and vision of its priest to meet the particular needs of the community.

Caraballo, who is an attorney -- and the project’s entire staff, legal and otherwise -- took on the woman as a client for no charge. She remembers the look on her client’s face when she found out she would get all her money back.

“She couldn’t believe it,” Caraballo said. “She thought it was a dream.”

Making a difference in Hoboken
That client was one of about 14 the clinic has represented since it opened in May 2013. Despite its brief existence and small but growing caseload, the clinic has already made a difference in Hoboken. Recently, Caraballo’s advocacy on behalf of one client prompted elected officials and government agencies to intervene on behalf of 98 families who were facing eviction.

Both cases illustrate the need for the clinic, which is grounded in the economic reality of Hoboken, a community with wide disparities in income -- predominately affluent with significant pockets of poverty. Although Hoboken had a median household income of $105,000 from 2007 to 2011, 10 percent of its population lives below the poverty level, according to the U.S. Census Bureau.

“Oftentimes, the wealthy are well taken care of and the poor people are forgotten,” said Monsignor Robert Meyer, the pastor of Saints Peter and Paul and himself a lawyer. “But the church is a place where everybody’s welcome, so we could respond to the needs of each person.”

The project’s opening was preceded by about two years of discussions and planning -- and unanticipated delays caused by Hurricane Sandy, which inflicted severe damage in Hoboken a year ago. Months after the storm, in March 2013, Caraballo was hired. She soon incorporated the only privately funded legal clinic in the area.

Legal Services of New Jersey, a statewide legal aid system, has a Hudson County office in nearby Jersey City, but their resources are not adequate to meet the demand from area residents with low incomes, Caraballo said.

A Legal Services study found that 1 in 3 people in the state with incomes below 200 percent of the federal poverty level have at least one civil legal problem each year that requires the help of a lawyer. But only 1 in 5 of them ever obtains legal assistance. According to the Legal Services website, two-thirds of the 200,000 eligible people who seek their help each year must be turned away.

Soon after Meyer became the church’s pastor in 2010, he saw the obvious need for legal representation in the area. Known as Father Bob, Meyer has a law degree from Seton Hall University and a degree in canon law from the Catholic University of America. He teaches a class at Seton Hall, and some of his law students attend the church.

More questions, more need
As word of his background spread, people on the street and in the church began to ask Meyer not only for spiritual counsel but also for legal advice. They had questions about their landlords, municipal court cases, wills and other matters.

“The more questions, the more obvious to me there was a need,” Meyer said.

Ultimately, the questions that people were asking were about more than legal disputes, Meyer said. They spoke to a larger possibility.

“The Christian message is that God chose to become a human person in the form of Jesus,” Meyer said. “I think God continues to speak to us through people. People voicing their needs is as significant to me as something that comes from the heavens.”

Fortunately, within his congregation, the lawyer-priest had an abundance of resources to explore the problem and devise a response. About 900 families and individuals are parishioners at Saints Peter and Paul, including a significant number of lawyers.

Although no one knows exactly how many lawyers are on the parish rolls, several people use the phrase “a lot.” Seven lawyers currently serve on the clinic’s board of advisors. Most are church members.

Meyer gathered several of the attorney parishioners to talk about the need that he was seeing in the community. Soon, the new project began as so many church-related efforts do -- with the creation of a committee.

In October 2012, the committee’s work was sidelined by Hurricane Sandy. Hoboken suffered serious damage during the storm. Seventy percent of the city was without power, and many people were without heat as well. The church became an overnight shelter and offered food and other assistance. The National Guard brought evacuees to the church.

Building a law clinic
As the most urgent needs from the storm receded, the group resumed its work. The Waterfront Project began to take shape, and Caraballo was hired in March 2013. She works 25 hours a week and is the only paid employee.

During her first months on the job, she filed the necessary paperwork for the Waterfront Project to incorporate and become a separate 501(c)(3) nonprofit. A three-person board of trustees, made up of Meyer and two local attorneys, oversees the organization.

Caraballo, who previously worked in insurance law, knew how to take care of all the many details involved in starting a nonprofit, including getting the appropriate insurance coverage.

“What we’ve learned in the beginning is it’s best to build it brick by brick to make sure that you are moving forward at the appropriate pace,” said Albert Cooley, a Waterfront board member and parishioner at Saints Peter and Paul.

The clinic’s mission is to provide legal assistance to the “low-income, homeless, and other vulnerable and disadvantaged.” It handles only civil matters, such as consumer disputes, landlord-tenant conflicts, Social Security appeals and similar cases, and represents only individuals or families who live in Hudson County.

The church contributes the vast majority of the $75,000 budget. The clients’ average annual income is $10,000, Caraballo said. The legal services are free, though clients with incomes over $11,000 are charged a one-time consultation fee of $25.

“We’re a parish in a city,” Cooley said. “There are a large number of people in a small area, so there tend to be certain types of legal issues that pop up, like landlord-tenant issues. We live near New York, and there are immigration issues.”

Volunteers help with some of the legal research and administration. A volunteer accountant oversees the books, but Caraballo does everything else. She conducts initial interviews with those seeking help, represents clients, and networks with community organizations. She has spoken at the local homeless shelter to raise awareness of the clinic’s work.

Ideally suited parish
Supporting legal services requires a different approach than supporting a homeless shelter or other more traditional services, Caraballo said. Fortunately, with its many lawyer parishioners, Saints Peter and Paul parish is ideally suited to do that.

“In my opinion, the only way a parish can support a legal clinic is if it understands what it means to practice law,” she said. “Practicing law is not like giving people food or giving someone shelter -- you see the satisfaction right then and there. With law, it takes time to see the fruits.”

Only months after it opened, the Waterfront Project is already bearing fruit. Some, such as getting a refund for the woman whose furniture was resold, might seem relatively small, affecting only individual lives, albeit in dramatic ways. Others have had a broader impact, as Caraballo learned when she helped a group of families avoid eviction.

It began when one woman contacted Caraballo because her rent was about to go up and she feared she would become homeless. As Caraballo researched the case, she learned that 98 families were in the same situation.

Each family paid a portion of their rent, with the remainder covered by the Hoboken Housing Authority, using funds provided by the U.S. Department of Housing and Urban Development (HUD). Although the landlord had notified tenants that their rent was going up, HUD had not yet provided enough money to cover the increase. So the tenants had to make up the difference or face eviction.

“These people were between a rock and a hard place,” she said. “They just could not come up with the money.”

“Elizabeth seems passionate about the mission of her organization,” said Mark Albiez, chief of staff for State Senator Stack. “She was diligent in following up with our office.”

Caraballo received word from the housing authority in October that an agreement had been reached and that none of the 98 families would lose their homes.

‘It’s pretty cool’
“It’s pretty cool to see what we’ve done in a relatively short period of time with limited resources,” said Cooley, who was quick to praise Meyer and Caraballo’s leadership. “We’re seeing a tangible result, and that is rewarding.”

It’s rewarding for the clients, Caraballo and the board members, but the clinic is careful not to take on too many clients at one time. Caraballo takes what she called a “holistic approach” to helping clients, often offering assistance that goes far beyond legal advice and representation alone.

In another eviction case, she continued to help her client even after the legal crisis was resolved successfully, meeting with the woman several times to help her learn how to manage her budget. Those kinds of practical considerations are also part of the clinic’s work.

“Being able to help others in need is one of the fundamental pillars of the church,” Cooley said. “We try to carry that out in our mission.”

And the real mission, for both Saints Peter and Paul parish and the church broadly, Meyer said, is to “read the signs of the times” -- signs such as people asking for legal help.

“The signs of the times often are connected to who the people are at that particular time in society,” he said. “In our situation, as people continued to raise these issues, they become things we needed to respond to.”