What does game theory teach us about theological reflection?

What does game theory teach us about theological reflection?

Editor’s note: This is the final essay in a six-part series about behavioral theology.  Courtesy of Faith & Leadership www.faithandleadership.com.

In the Sisters of Zion Convent in Jerusalem near the start of the Via Dolorosa, a roped-off section draws attention to a carving in the stone floor. Crudely etched lines form a circle of boxes in a pattern reminiscent of a game board, which is exactly what it is.

Wherever off-duty Roman soldiers gathered, game boards like this one for Basileus, the game of Kings, are commonly found. The object of the game was simple: soldiers rolled dice in order to push two game pieces, kings, forward along a pathway with long reeds. The king who made it to the center first won. The king who didn’t was toppled in a mock execution.

Our guide in Israel delighted in relating this game to the scene of Jesus’ torment at the hands of Roman guards before his crucifixion. While this connection is exegetically hypothetical, the allusions are striking.

In all four Gospels, Roman soldiers dress Jesus as a king, in a robe, and three mention a crown of thorns, perhaps resembling the nimbus found around the head of the divine emperor on Roman coins. The soldiers strike Jesus with a reed, mocking him with taunts of “Hail, King of the Jews!” It is easy to imagine Roman soldiers, tired of playing with symbols, transforming Jesus into a life-size game piece.

If this is a fair read, what is mockery to the soldiers is dramatic irony to the communities hearing the Gospels. These communities know Jesus as true ho basileus. The man they mock as king really is king to the evangelists. 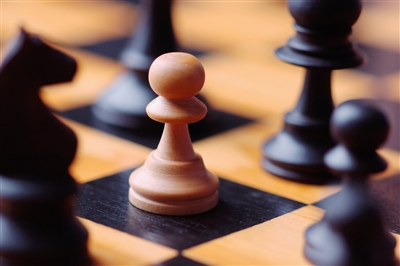 The game the Roman soldiers play out of boredom or cruelty is revelatory to these communities, because far more powerfully than merely telling the reader that Jesus will be a rejected king, the Gospels show it in the image of the game. Games, then and now, often possess this unusual, revelatory quality, offering participants and spectators new insights into themselves and the world around them.

Game theory, a rigorous field of mathematics, helps us better understand the revelatory quality games possess. The term “game,” in this discipline, refers to a conflicted interaction between two or more players.

The power of game theory lies in its ability not only to frame common relational interactions into accessible, parable-like stories but also to simplify complicated situations into strategic models based on payoffs derived from the preferences of each player.

Game theory’s influence in the world is without question. Political and business leaders pay game theorists princely consulting fees, and terms such as “zero-sum game” and games like “chicken” and the “prisoner’s dilemma” have found their way into common parlance.

However, the weakness of game theory is that it assumes each player is a perfectly rational, perfectly self-interested, Spock-like being. The problem, as we’ve seen throughout this series on behavioral theology, is that actual living, breathing human beings aren’t perfectly rational. We are prone to predictable biases due to the heuristics our brains use to process the world. Moreover, we are emotional, both more loving and more easily angered than classical game theory predicts.

At least one major theologian sees the potential connection to the church.

Sarah Coakley, in her 2012 Gifford Lectures at the University of Aberdeen, brought together game theory and theology in an attempt to carve out a new space in which theology might find some rapprochement with science, particularly the science of evolution.

Further, in “Evolution, Games, and God: The Principle of Cooperation,” Coakley joined mathematician and game theorist Martin Nowak, along with others, in examining how Nowak’s work with the prisoner’s dilemma in a repeated setting shows the surprising power of cooperation as a mechanism for evolution.

Coakley also joined Nowak and other colleagues to conduct experimental research on the effect of faith and people’s willingness to cooperate when playing a one-shot prisoner’s dilemma .

One study included Christians, adherents of other faith traditions and those who identify with no faith tradition. Before playing a prisoner’s dilemma with a stranger via a computer screen, the participants were all given a text to read -- Judeo-Christian scripture, Hindu scripture or a secular text.

When Christians were “primed” by reading a biblical passage, they were more likely to cooperate in the course of the game than when reading a passage from another religious tradition or a secular text. In other words, the game revealed the practical impact of spiritual formation on an individual’s willingness to cooperate.

This experiment suggests the way theological reflection should be carried out in the church.

Coakley didn’t simply assert that faith formation would prompt Christians into more cooperation; she and her colleagues hypothesized that this was the case and then observed people playing games to test their thinking.

Such willingness to experiment shows not only intellectual humility but also a deep respect for the incarnation. Behavioral theology isn’t content for theology to remain a mental activity; the behavioral theologian wants to see how theology lives and breathes in actual human beings and assumes that our thinking may not always match our living.

Behavioral game theory and cognitive science will never replace the primary significance of worship, prayer, devotion to Holy Scripture and spiritual formation for the church.

The modest hope of behavioral theology is to create a conversation between our thinking and our observation of how actual living, breathing human beings live out faith in real life.

Studies like the one Sarah Coakley helped lead show how even simple games like the prisoner’s dilemma can have a revelatory quality, something akin to the soldiers playing Basileus, helping leaders see whether our beliefs and formative practices are bearing fruit.

My hope is that this study is just the beginning. Other games -- the public goods game, for example -- might offer insight into questions ranging from how faith is shaping our ability to live in community with one another to why congregations in the same ZIP code show different rates of growth. Exciting interdisciplinary conversations are taking place, and I’m hopeful that the church will join the discussion.

The question is, Are we game?

The opinions in this commentary are those of the author and do not necessarily reflect the policy or position of the Florida Conference.