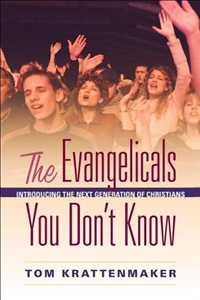 For anyone who’s sick of explaining that not all evangelicals are flag-waving, Quran-burning, gay-hating, science-skeptic, anti-abortion ralliers, The Evangelicals You Don’t Know: Introducing the Next Generation of Christians provides a boost of encouragement. Written by frequent USA Today contributor Tom Krattenmaker, this who’s who of “new-paradigm evangelicals” explains how a growing movement of Jesus-followers are “pulling American evangelicalism out of its late 20th-century rut and turning it into the jaw-dropping, life-changing, world-altering force they believe it ought to be.”

Unlike their predecessors, these new evangelicals are characterized by a willingness to collaborate with members of other religions and no religion for the common good, warm acceptance of LGBTQ folks, a rejection of the dualistic pro-life vs. pro-choice debate, and a desire to participate in mainstream culture rather than wage war against it. All this “while lessening their devotion to Jesus by not a single jot or tittle.”

Admittedly, the book’s cover photo doesn’t quite do justice to Krattenmaker’s observations. Featuring young worshipers in a dark sanctuary with hands uplifted and eyes closed, each apparently lost in a private moment of four-chord progression praise, the cover looks more like a Hillsong worship concert circa 1998 than cutting-edge 2013 evangelicals. (If you’re unfamiliar with the four-chord progression, Google “how to write a worship song in five minutes or less.” You’re welcome.)

Yet Krattenmaker emphasizes that evangelicals are moving out of darkened sanctuaries and opening their eyes to the messy and beautiful world outside of their Christian subculture. He writes: “Moved by a new rallying cry—engage!—new-century evangelicals are finding faith-stirring beauty in secular creative works and making their own contributions to that once-verboten place called mainstream culture.” Evangelicals are also venturing beyond the walls of megachurches to volunteer at failing public schools, stop the sex trade industry, and provide homes for foster children, a “no-strings-attached, no proselytizing form of engagement” that turns many assumptions about U.S. evangelicals on their head.

One disappointment: I count only three evangelical women—Julie Clawson, Lisa Sharon Harper, and Stephanie Tama-Sweet—mentioned at any length throughout the book. Three. Krattenmaker acknowledges this “disproportion,” but explains that “this parallels an unfortunate reality about this new evangelicalism (and the old one, too)—namely, that the movement is largely led by men.” Huh? While Krattenmaker expresses a sincere hope that he’ll encourage more women to step forward, I don’t see evangelical women waiting around for his invitation.

Consider Rachel Held Evans, Lynne Hybels, Jennifer Knapp, or Katharine Hayhoe—women who have been champions of, respectively, a nonliteral reading of scripture, justice for Palestinians, gay rights, and action against climate change. Say it with me: Women are just as involved in the new currents of evangelicalism as their male counterparts. And unlike previous generations of evangelicals, these pioneering women aren’t going to let a bad exegesis of 1 Timothy 2:12 keep them quiet.

Nevertheless, I appreciated Kratten-maker’s desire to present an often-overlooked side of evangelicalism that has “quieter voices and more attentive ears” than the Pat Robertson-type personalities who get a lot more press. “Meet the Christian non-totalitarians, the evangelical pluralists, who are at peace with different beliefs and feel no compulsion to defeat them,” he writes, “who are willing to go to work with anyone ... to support that struggling school, feed those starving kids, free that sex slave, protect those innocents under threat of war or poverty, and bring an overdue dose of humility and decency to politics.” Amen.

Yet, a question lingers. Though Krattenmaker sprinkles phrases such as “new evangelicals” or “new-paradigm evangelicals” liberally throughout his pages, I rarely saw quotes of the folks he profiles at length—Timothy Keller, Jonathan Merritt, Gabe Lyons, Jim Henderson—claiming that label for themselves. So I wondered: Do they even consider themselves evangelicals, “new” or otherwise?

In a 2012 interview, NPR’s On Being host Krista Tippet asked Lyons directly about his evangelical identity. Lyons’ response? “I don’t really use that word,” he explained. “That’s how media would describe me because of how I grew up and what I believe. ... I tend to think of myself as a Christian, somebody who’s trying to follow Jesus and not attach too many more labels to it.”

Betsy Shirley is a former editorial assistant at Sojourners and an M.Div. student at Yale Divinity School. Commentary courtesy of www.sojourners.com.  The opinions are those of the author and do not necessarily reflect the policies or position of the Florida Conference of The United Methodist Church.