Christian leadership is about being a follower

Christian leadership is about being a follower

My friend -- I’ll call her Lisa -- was enjoying her work as a vice president at a Christian university. After an influential career in business, she had entered the field of higher education administration. And for the next 10 years, she had served faithfully across disciplines, listening carefully to students, faculty and board members. She had earned the position of confidante to the cabinet and role model to staff.

By her industry’s standards, Lisa’s next career step would have been up: university president. Yet when she was recruited to apply at another college for the top position, she paused. Others in her situation would have quickly pursued such a prestigious job. But as much as Lisa wanted someday to be a college president, something else took precedent in her life: following God.

She had decided long before that moment that she would not step to the right or the left without first watching “where God was leading,” as she told me. Her loyalty to her colleagues and president had been deepened through a series of difficult challenges, some of which Lisa knew were not quite complete. So because she had cultivated a posture of following after God, she was neither enticed to deviate from that path nor convinced that another, more prominent position -- at that time -- was his desire. 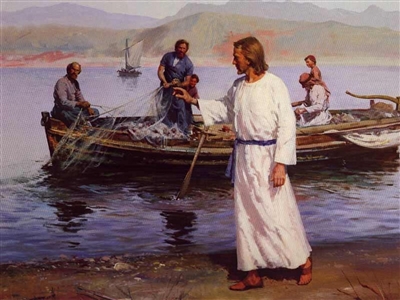 But it wasn’t easy. In fact, following in our culture rarely is, because by definition, following recognizes that someone is ahead of you. Following entails standing at an intersection of roads and focusing on the guide beckoning you toward him. Each step, then, requires you to give up power and yield control. And who wants to do that?

Not many of us. Few seem to have discovered the gift of following, the one I came to admire in my friend. In fact, I know of only a handful of leaders who have said no until they felt they could see “where God was leading.”

But this single-minded focus and profound sense of calling intrigues me. Certainly, we need leaders of integrity who are genuinely called to that role, and training that can equip them. With abundant resources available, we have access to more leadership knowledge than ever before.

Yet when Christian professionals talk more of leadership strategies and career plans than, say, love, humility or excellence, are we forgetting an integral element of our faith?

Part of the problem, I think, is cultural -- an easy infatuation with the glitzy leadership mantras meant for those who want to get ahead, not behind. Marketing gurus across theologies know well that “following” is just not sexy.

“We all have the drum major instinct,” the Rev. Dr. Martin Luther King Jr. said in one of his last sermons. “We all want to be important, to surpass others, to achieve distinction, to lead the parade.”

And yet when we elevate such leadership instincts over disciplined followership, we open the door to unchecked authority, greed, pride, even abuse. As King went on to say, “[The] perverted use of the drum major instinct … has led to the most tragic prejudice, the most tragic expressions of man’s inhumanity to man.”

Maybe we need a new approach, a new genre of resources that celebrates the contributions of great followers through the ages -- Mother Teresa, the desert fathers, forgotten missionaries -- narratives that explore the secrets to contented lives of service rather than the habits of effective leaders.

The examples of great followers can renew our imaginations and deepen our theology. At the same time, they can equip a new generation of followers that emphasizes the power of community living, of mutual care, where everyone’s contributions matter, a model grounded in Christ’s ministry.

For when he invited a fisherman, a tax collector and other unlikely disciples to follow after him, they learned -- eventually -- the secret of the straight and narrow. They were drawn to one thing only: him. Period. Something about Christ trumped any other career aspirations or ambitions these hardworking, ordinary citizens might have had.

And it changed everything. Their goals, no longer bound by their own small ambitions, took on eternal proportions. They no longer cared about the fish they could sell or the taxes they could hoard but about hearing and obeying the voice of their new teacher as they interacted with others.

Christ never debated with the Pharisees or the Sadducees -- the authorities of the time -- how to create better strategies for maximizing their profits or investments. Instead, he focused on taking up one’s cross, on sacrifice, love and costly service, on single-minded devotion to him. In a word, he did not call leaders; he called followers.

Obviously, though, some of those followers became leaders. Peter, John and Matthew each evolved as leaders, but only when they submitted to the Lord. Or Paul, who actually advocated following as a means to gain the most impact for God’s kingdom.

He humbly invited those under him, “Follow me as I follow Christ.” Of all people, Paul knew the slippery slope of believing the titles and the prestige instead of assuming the posture of following. Yet such radical but single-minded trust, such an intentional focus of heart and mind on what -- and especially who -- is above all and in all and through all, is indeed the heart of the gospel.

So no matter our title or opportunity, our posture as followers of the risen Lord is to serve, not climb; to reach downward, not upward. Certainly, there is no greater meaning or purpose than that. And leadership without followership is not leadership at all.

This is a reprint of the commentary that appeared in "Faith & Leadership" www.faithandleadership.com. The views and opinions expressed in this commentary are those of the author and do not necessarily reflect the official policy or position of the Florida Conference of The United Methodist Church.