To comfort the afflicted

To comfort the afflicted 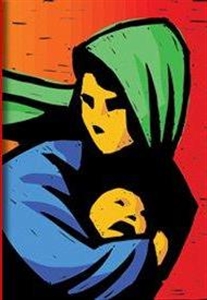 Once upon a time, long before there were birth certificates or Social Security numbers, there were immigrants. If you are or have been an immigrant without documents, you may think life must have been easier then, that you would never be afraid of getting found out and deported.

But life was not easier—at least not in the first century C.E., in the five mostly rural Roman provinces in what is now Turkey. Especially if you were a follower of Jesus.

As an immigrant, you are called by one of two names in Greek, the trade language of the time. You are a paroikos if you had fled or been forced from your native community for any personal, economic, or political reason and were trying to eke out a living in a foreign land. Oikos refers to "house" or the economic structure of the extended household in which native people lived. Para means "alongside of." In other words, you are "away from home," a resident alien on the edges of ordinary life.

Consequently, you have fewer rights than full citizens. Never able to own land, you are a sharecropper, a craftsperson, or perhaps a small trader or shopkeeper. You may have been driven off your land by high taxes you could not pay, or perhaps you are a second son and will not inherit your father's land. You may be the wife or daughter of such a man, or a widow driven to support yourself and your children. You have legal restrictions regarding intermarriage, commerce, and succession of property. You have no political rights, such as voting in public assemblies or joining in guilds. Unlike citizens, if you are charged with a crime, you can be tortured.

But you would be even more marginalized as parepidemoi, a term referring to "a temporary visitor passing by." Some of you could be refugees fleeing war, violence, natural disaster, or infectious plague. Imagine Syrian refugees today fleeing to Turkey or Lebanon with no U.N. camp or social services from a local government whatsoever. Paredidemoi have no human or civil rights; many will end up as slaves torn from their families.

Mistranslating and misinterpreting
I owe the sociological material in this article to several published works on 1 Peter by New Testament scholar John H. Elliott and his interdependence with the Context Group of biblical scholars. Their cultural insights bring new dimensions to traditional interpretations and challenge over-spiritualizing of texts.

Case in point: Traditional theology assumes that the actual immigrants, exiles, refugees, and foreigners receiving Peter's letter are us—all Christians sojourning from birth to death in an alien world, longing for our true home in heaven. Think of the gospel song, "I'm but a stranger here; heaven is my home." Some Bible translations support this. The NIV names the recipients "strangers in the world" (1:1), and the New English Bible tells them what to do "while you live out your time on earth" (1:17), though "earth" and "world" never occur in the Greek text. To call comfortable, affluent American Christians today "exiles" and "strangers in the world" defies reality. It ignores the current harsh existence of many impoverished immigrants or the desperate plight of refugees forced to leave home and family for basic survival. It overlooks the overarching theme of suffering that pervades this letter.

This is a reprint of a commentary posted on www.sojourners.com. The views and opinions expressed in this commentary are those of the author and do not necessarily reflect the official policy or position of the Florida Conference of The United Methodist Church.