“Well, there are all manner of lesser imps and demons, Pete, but the great Satan hisself is red and scaly with a bifurcated tail, and he carries a hay fork.” —Ulysses Everett McGill in O Brother, Where Art Thou?

Throughout the ages, classical depictions of Satan—a.k.a. the devil, the evil one, Lucifer, the morning star, the prince of darkness, Beelzebub, the accuser, the serpent—envision him as an otherworldly, dragonlike creature, often of a reddish hue with horns, scales, hooves, bat wings and a pointy tail.

But it’s not always that way—and it probably shouldn’t be. Maybe we need to see Satan for the invisible threat that he is.

In his 1942 satirical novel, The Screwtape Letters, renowned author and Christian apologist C.S. Lewis casts Satan as Screwtape, a meddling, scheming bureaucrat, the “Senior Tempter” and undersecretary of his department (in the “Lowerarchy” of hell).

Lewis presents a series of 31 letters of correspondence between Screwtape and his nephew, Wormwood, as the younger tempter tries to lure his target (an average man in pre-World War II Britain known as “The Patient”) away from God and toward damnation.

In the preface to Screwtape, Lewis bemoaned living in a world of “Admin,” where “the greatest evil” isn’t necessarily confined to Dickensian squalor or concentration camps or battlefields. 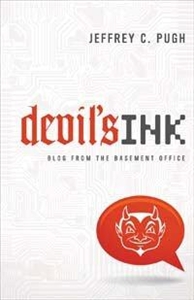 Rather, he wrote, evil is “conceived and ordered . . . in clean, carpeted, warmed, and well-lighted offices, by quiet men with white collars and cut fingernails and smooth-shaven cheeks who do not need to raise their voice. Hence, naturally enough, my symbol for hell is something like the bureaucracy of a police state or the offices of a thoroughly nasty business concern.”

Rather than a series of correspondence—because, really, who writes letters anymore?—Dr. Pugh reimagines the devil as a blogger who communicates his twisted point of view on humanity, God and the world to his “colleagues” through dozens of blog posts.

Why a blog? Dr. Pugh’s Satan explains in the opening lines of his first blog post titled, “Pleased to Meet You, Hope You Guessed My Name”:

“You may wonder why I am starting a blog. The fact is, my colleagues, we must be flexible and innovative or we risk losing influence, and if there is one thing that I fear, it is losing influence.”

Dr. Pugh’s Satan anticipated readers’ questions about why his Satan chose to embrace a blog rather than another social media platform.

“I debated whether to start a Facebook page, but there are so many who are doing the heavy lifting for us there it would be merely redundant,” Dr. Pugh’s protagonist writes. “I am also thinking of a Twitter account, but am still trying to figure out what the point is.”

Like any good blogger, Dr. Pugh’s devil arranges his dispatches by topic, complete with “tags” at the bottom of each post. He mixes it up a bit in terms of form and content, weaving clever pop culture references with music (did you catch that Rolling Stones reference earlier?), television, movies and celebrity throughout.

Some of the fictional blog posts are short, others rather lengthy, and the subject matter varies wildly: Desire. Grace (which the devil calls “unseemly and obnoxious”). The Book of Job. Gitmo. Terrorism. The politicizing of the church. Theodicy. Rationalism. And the Amish (who apparently make Satan terribly nervous.)

The blogger’s tone is consistently sarcastic and often caustic (he refers to his colleagues as “duh-sciples”), but what would you expect from the prince of darkness?

In one of the funniest posts, “I’m Going to Disney World,” the devil explains why the happiest place on Earth serves his purposes more elegantly than the infamous Las Vegas Strip:

“I love Disney World. No, seriously, it is one of my most enjoyable places on the planet,” he writes. “It has given them so, so much: illusions, fantasy, Britney Spears. One small thing I have always enjoyed about it is the nuance and deception on display. Take Vegas, for instance. There we don’t have to concern ourselves with working hard. . . . But Disney World is even better because we can still fleece the rubes, but this time we use their most precious possession to do it, their children.”

Dr. Pugh is wonderfully clever and bold in his critique of church culture. The book is not a meditation on personal holiness and sin but rather “an exploration of the ways that evil embeds itself structurally in human life,” particularly through the seemingly frivolous (and not-so-frivolous) avenue of popular culture.

“Though our methods are timeless, we also have learned through the ages to use those fleeting and transitory things that humans have created to help us reach our goals,” Dr. Pugh’s blogger writes. “One must change with the times or risk being irrelevant, and if there is one thing I am not prepared to be at this time it is ignored.”

Perhaps church leaders who read Devil’s Ink will be chastened to rethink their passion to remain “relevant.”

Review courtesy of United Methodist Reporter and Religion News Service.  Ms. Falsani is the author of The Dude Abides: The Gospel According to the Coen Brothers (Zondervan, 2009).