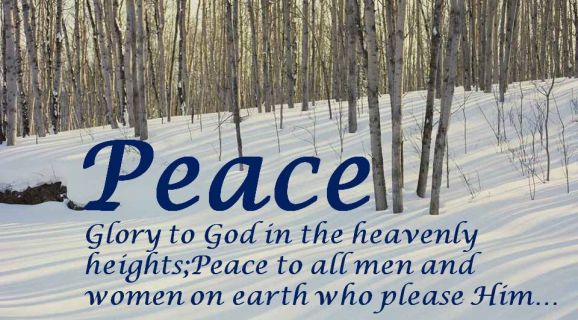 The following commentary was first posted on May 5, 2006, and relates to the Advent theme of Peace.

One of the great moral challenges of the human race is to learn to eradicate war as an instrument of international politics. Over the centuries much progress has been made: no longer do armies routinely go to war every spring. However, war is still the greatest moral problem of our species. The 20th century was the bloodiest 100 years in the history of humankind. The prospects for the 21st are not encouraging.

The notion of eradicating war seems to be utopian. Christians are too aware of the power of sin to believe that perfect peace is attainable in human history before the final revelation of Jesus Christ when “all things are subject” to his reign (I Corinthians 15:24-28). There may be occasions when we have to acknowledge the tragic reality that war may have to be waged to correct injustice and protect other lives.

The main incentive to work for the eradication of war is the Lordship of Jesus Christ. His vocation included a rejection of violence, especially when violence may have spared his own life. He is the one upon whom God the Father put his stamp of approval by raising him from the dead by the power of the Holy Spirit and declaring him to be God’s Son and our Lord. In Jesus Christ God has raised an ensign of God’s purposes for every human being and for the whole human race. We are to march into the future under this ensign. Although the human race will fail, we are not free to forget this ensign God has raised.

The Lordship of Jesus Christ is hidden to all except to those of us who know him by faith. While his rule is hidden, it is not inert. By the power of the Holy Spirit, Christ is at work in human history now to bring human passions to subjection to God’s good purposes, including aggression and desire for domination that lead to war. The Scottish theologian John Baillie, who rejected utopian dreams of human progress in “The Belief In Progress,” nevertheless affirmed the Christian conviction that there can be an increasing appropriation of “the mind of Christ” in human history.

In the end, war is a spiritual problem. As the Epistle of James noted, the root causes of all human conflict are our “cravings” that need to be re-ordered by the Spirit of Jesus Christ (see James 4:1-10). What we call “war fever” and “the fog of war” that periodically erupt in human societies — only to be regretted later — are the result of the passions and blindness of sin. They can be healed by the power and illumination of the Holy Spirit.

The enduring Christian attitude toward war was expressed in the 4th century by Lactantius, the tutor of a son of Emperor Constantine. Lactantius deplored war as “the overthrowing of virtues.” He wrote in “The Christian Institutes”: “In the first place, the union of human society is taken away, innocence is taken away, the abstaining of the property of another is taken away; lastly, justice itself is taken away, which is unable to bear the tearing asunder of the human race, and wherever arms have glittered, must be banished and exterminated from thence” (Book 6, Chapter 6).

The whole history of war, even when it is deemed unavoidable, confirms Lactantius’ analysis that war often creates national division, corrupts human lives and institutions, and sows the seeds of future international conflict.

The Christian commitment to try to eradicate war is not unique; it resonates in other religious traditions. This is not surprising since Jesus Christ is “the true light, which enlightens everyone … ” (John 1:9). An example is the “Bhagavad-Gita,” the spiritual writing of Hinduism, which was probably composed around 500 B.C. It is a divine revelation to a prince, Arjuna, who has no desire to go to war against his own royal relatives. It is revealed to Arjuna that those who live by the truth possess “harmlessness and non-violence” among a host of other virtues, including intelligence, spiritual vision, patient forgiveness, quietness and self-harmony (10:4-5).

Together with people of other religious traditions, we who are Christians are called to be at war with war. Our battle is a spiritual one. It begins with each of us, but it needs to extend to our neighbors, our nation and all other nations, and every human being in an office of authority and rule.

Thinking of how Jesus went to the cross under Pontius Pilate, but how God raised him from the dead to be the Lord of all, the apostle Paul declared that he “disarmed the rulers and authorities and made a public example of them” (Colossians 2”15). He still lives and rules as the Prince of Peace, and he still makes “a public example” of how violence and injustice do not have God’s stamp of approval.