LAKELAND -- The music of the Africa University Choir was so moving that some audience members simply couldn’t contain themselves.

They stood and began swaying and rhythmically clapping, as the singers, bedecked in colorful African clothing, filled the assembly hall at The Lakeland Center with their sounds.

Jim Salley, the associate vice chancellor of Africa University, took note of the enthusiasm and urged others in the crowd to not hold back.

Before the Thursday evening session of the 2014 Annual Conference of the Florida Conference had ended, the crowd was so revved up that people were forming conga lines and joyously stepping down aisles in the hall at Lakeland Center.

The singers – representing a mere fraction of the entire choir – came to the event to give conference members a small sampling of accomplishments achieved since Africa University opened 22 years ago.

“These brothers and sisters are the return of the investment that you have been making into a university that some people said would never happen,” said Salley, who has been associated with Africa University since its inception. 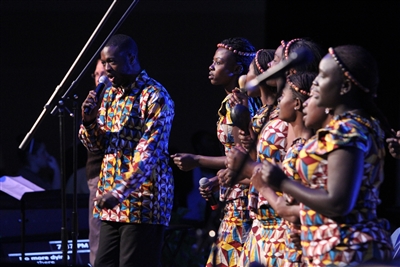 “When the African Initiative passed in 1988 at the General Conference in St. Louis, Mo., there were some naysayers,” Salley said. “Some said we’d never lay a brick, never build a building, never graduate a student. And, one high-level United Methodist Church official said, ‘Did anything good come out of Africa?’ “

Opponents said funding the effort would be like pouring money down a rat hole, Salley said.

But there were others, like the Florida Conference, who have been steadfast supporters, Salley added.

Africa University opened in 1992 with 40 students. It had seven full-time and five part-time employees.

Its student body represented six countries on the African continent.

Visitors to Africa University today would find 42 buildings, 1,700 students during the week and another 1,700 during the evening and weekends. There are 270 full-time employees, Salley said.

Even during Zimbabwe’s darkest economic hour, Salley added, “we never missed a paycheck and these students ate three meals a day in the dining room.”

He said the university’s financial house is in order, too, with a balanced budget, a clean audit and no debt.

When someone asks, ‘Did anything good come out of Africa,” Salley said, “What we say is ‘Come and see.’”

Florida Bishop Ken Carter described the visit by Salley and the choir as a joyous occasion for the Florida Conference.

“This is important to me for two reasons: The first one is, every one of us has been able to accomplish something in life because we had access to education. I know that’s true for myself.

“What Africa University represents is an access to a quality, Christian higher education for the leadership of Africa,” Carter said. He puts Africa University at the top of his list of things that make him the most proud about The United Methodist Church.

“It has truly been one of the miracles God has performed through our denomination,” Carter said.

The students educated at Africa University “will be the leadership, as global Christianity continues to explode on the continent of Africa,” Carter added.

Throughout the evening, Salley’s remarks had the crowd laughing, but also offered food for thought.

He shared his story about how he wound up at the Africa University.

It began when he was a recent college graduate and was thinking about changing his religion.

But then, his pastor at the time invited him to become more involved in The United Methodist Church.

He told the pastor:  “There are two professions that I will never work in: The first one is higher education. The second one is the church.”

The pastor listened, but then asked Salley if he would do him a favor and attend the upcoming South Carolina Annual Conference.

Salley agreed, and on the way to the conference he was coached by a fellow passenger on the dos and don’ts of attending an annual conference.

It turns out that Salley never missed an annual conference after his first one, and that his pastor had known all along that Salley had been thinking about a spiritual shift.
Salley was also all wrong when he thought he had no interest in the church or higher education.

“I find myself today as an individual who has walked on six continents, a person who has served on three general agencies of The United Methodist Church,” Salley said.

He now understands that his pastor had the chance to help him find his path, and the pastor seized that opportunity.

Salley also knows that what is capable of changing his life can also change the lives of others.

“Lay or clergy, we are all in this thing together. Tell somebody what God has done for you,” he said.

“We’re called to grab a chance at telling someone about the saving grace of our Lord, Jesus Christ.

“Florida Conference, if God has ever touched your life, then you ought to -- and have a mandate -- to tell people what the Lord has done for you.”

Africa University is the designated recipient of half of this year's Annual Conference offering. About $51,000 had been collected as of Wednesday's evening communion service.

-- B.C. Manion is a freelance writer based in Tampa.