Building a trail and a community in Boone

Building a trail and a community in Boone

I don’t know what else I know about leadership, but I know this: I believe in the generative power of creative friendship.

Here’s what I mean. When I first arrived at Boone United Methodist in 2011, I tried to get to know the campus ministers in our North Carolina town right away. After all, revivals historically break out on campuses, and I come from academia. Plus, campus ministers keep me in cool music.

I hit it off right away with Eric Heistand, the campus minister at Appalachian State University who works with the Cru (formerly Campus Crusade). We share a love for Tim Keller’s work on the church’s calling to bless the city -- in Keller’s case, New York.

We wondered together whether that approach could work in Boone, our university town of 18,000 permanent residents and 17,000 students.

“I tell you what a church in this town ought to do,” he said. “Build a trail up Howard’s Knob.”

Howard’s Knob is the highest peak in Boone. It features a county park with breathtaking views of the valley, great spots for hanging hammocks and space for students to just be. If you’ve seen our local outdoor drama about Daniel Boone, “Horn in the West,” you know that Widow Howard is one of the main characters. I’ll let you guess where she lived.

The hairpin-curve road up to the park is a wonder, but it’s not hiking-friendly. The outdoor community has always wanted a way to hike up Boone’s greatest peak.

I searched through the mental database of my congregation and found that our church owns some 50 acres up Howard’s Knob, on the side away from town. It has a conservation easement on it, so we can’t develop it, and the donors who gave it had suggested we build a trail on it.

“I think we could do that,” I told Eric.

That was two years ago. Eric subsequently joined our church and became the Sunday school teacher of our fastest-growing class, mostly filled with 30- to 40-somethings with small kids.

He marshaled this group, along with others, for the trail-building project. They began digging the trail with energy I thought not possible among the minivan set.

Our kids joined the effort as well, learning to wield exotic tools like fire rakes and Pulaskis. They’ve dug once a week, and sometimes twice, and invited friends from school to help.

The trail-building crew has included folks beyond our church community. Blue Ridge Conservancy has directed the whole thing as part of their mission to protect local wild spaces. Our neighbors have pitched in. Fraternities, sororities and athletic teams from App State have dug trail and trained on the thing. We’ve had volunteers as old as 80-plus and as young as 2.

Some who’d never find themselves inside a church have found themselves outside it, doing hard manual labor together to create something designed to bless our town.

The Boone United Trail has become the kind of project that Andy Crouch, following Keller, calls “a counterculture for the common good.”

We recently inaugurated the trail with bounce houses, free trail mix (bless you, Earth Fare) and barbecue (bless you, Kickin’ Mule). We expected 300 people and had north of 400, including town council members, chamber of commerce leaders and friends we’ve never met who came for the party.

We’re far from done -- one extra loop needs digging, and the whole thing needs fortifying. But we have digging volunteers we never had before. And after two years of investment, Eric and his fellow trail bosses will see the thing through. Boone has its newest hiking trail. 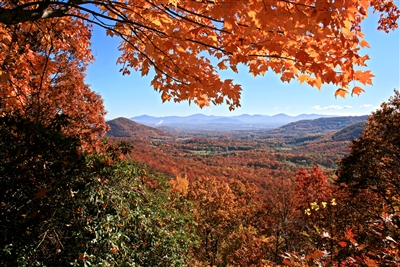 Our slogan for it has been “Welcome to our backyard.”

It hasn’t all been easy, of course. Some neighbors have feared we would reduce their property value (although research shows that trails actually have the opposite effect). And getting volunteers to dig through rock can be a challenge.

Eric’s fellow trail boss, Scott St. Clair, at one point found that he was struggling to extend his arms as he examined kids in his pediatrics practice. His own doctor asked him, “Have you been doing lots of manual labor for some reason?” Scott said no and then thought, “Oh yeah, I’ve been digging up a mountain.”

We can’t actually get to the top. Howard’s Knob Park is tantalizingly close, but there remains private property between our easement and the park. Yet for all the challenges, the fruit has been real -- 2.7 miles of a lollipop trail that rises 600 feet and will give your legs a workout. Your soul, too.

Some might wonder why a church would bother with a trail. We have enough projects to tackle within the church, Lord knows. And besides, isn’t building a trail more of a civic-do-gooder sort of thing?

But we see it as a way of blessing our town, of showing that we love what our community loves, of getting us in new relationships with folks we’d never have met otherwise, of making our backyard theirs.

My predecessor John Fitzgerald spoke of seeing prayer mountains on a pilgrimage to Korea -- places of prayer that have fueled revival in that country. Why not here? Big God-things happen on mountains: Abraham’s near sacrifice, Moses’ and Elijah’s meetings with God, Jesus’ most famous sermon, his ascension. We can’t say in advance what will happen on ours, but we expect to be changed by it.

We can say it’s a lot easier to get up the mountain in our backyard now. And we expect strangers to meet on it and become friends, friends to gather on it and meet God, and everyone who walks up it to come down changed.

Creative friendship births things that otherwise would not have existed. It’s not easy, but it is profoundly good.

Courtesy of Faith & Leadership, www.faithandleadership.com. The opinions are those of the author and do not necessarily reflect the position and the policy of the Florida Conference.