What the church can learn from the YMCA

What the church can learn from the YMCA 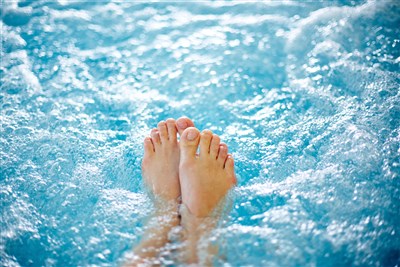 Last week I was a little under the weather, so when my husband and kids took off after church for a hike, I headed to the YMCA. It’s only a two minute drive from our house and we’ve been members for nearly 5 years now.

As I sat in the hot tub, watching folks come and go, I had the sensation of being in a thin space. According to Celtic tradition, a thin place is when Heaven & Earth feel particularly close together. Or, as Eric Weiner put it in his New York Times travel article a couple years ago, it’s "where the distance between heaven and earth collapses and we’re able to catch glimpses of the divine, or the transcendent."

The YMCA might seem a strange place to behold the holiness of God, but this is what I noticed while I was sitting quietly with the water swirling around my feet:

I heard Mandarin, Spanish, Korean and what I think was Amharic. I heard English, too, of course, and for a brief moment, English with a heavy Nigerian accent. I saw brown skin and black skin, tan skin, white skin, splotchy skin, and smooth skin.

I saw a young girl and her mama soaking together in the hot tub, the mom still fully clothed with her head wrapped. I saw heavily tatooed 20-somethings heading for the steam room. I saw three women, probably in their seventies, with drooping skin and sagging suits, laughing uproariously on the benches near the shallow end of the pool. I saw fat folks, skinny folks, tall folks and short folks.

I saw a middle-aged man limp slowly along and finally sink down into the hot tub. I saw two women walking arm in arm, one obviously leading the other who could not see, to the sauna. I saw two of the lifeguards re-positioning and working with tools on the lift that lowers those who are wheel-chair bound down into pool if they are unable to get in on their own. There was a man sitting beside me who talked to himself at length.

I was there for about an hour and as I sensed the nearness of God in that space, it occurred to me what I was seeing — I was seeing the Kingdom of God.

I was seeing a diversity of age and gender, race and ethnicity, ability and culture that I have never seen in any other place at one time. I was seeing what the Church is supposed to look like. I was seeing Revelation 7:9 in all of its glorious diversity right there in living color.

As I eventually made my way back to the locker room, I marveled at this. It wasn’t a unique day at the Y. On the contrary, this sort of diversity is always on full display there. But what makes it possible? How has the West Seattle YMCA managed to do what the Church often only dreams of doing? What makes my local Y successful at living into the image of the Kingdom of God when so many churches fail to come even close?

When a person walks into the foyer of a church, what do they do? They usually try to get a peek inside the sanctuary before they commit to walking all the way in, right? They want to see who’s in there first! They want to see what sort of story the church is telling. Who’s standing up front? Who’s leading the singing? What kinds of songs are they singing? What does the pastor look like? What sorts of people are sitting in the pews? In essence, the first question the visitor in the foyer is asking is this:

"Are you telling my story here?"

Am I going to belong? Will I feel out of place? Will I stick out like a sore thumb? Will the sermon and the singing resonate with me in some way? Will I be comfortable showing these people who I am?

When the bleeding woman touched the cloak of Jesus; when the woman at the well heard about the living water; when Zacchaeus looked down in surprise from the sycamore tree, each was struck with the realization that Jesus was telling their story. Jesus saw them — really, truly saw them and insisted on telling their diverse and otherwise untold stories when nobody else would even consider it.

Is it mere chance that the Y in our neighborhood is able to draw in such a vast conglomeration of people? No, it’s not magic and it’s not coincidence. It stems directly from the story that the West Seattle YMCA is telling. They have made a concerted and intentional effort to tell diverse and often untold stories.

When I walked in last week, a black woman greeted me and helped me sign my boys up for Kids In Motion, a transgendered person took my card and exchanged it for a locker key, and the signs that greeted me throughout the facility showed an eclectic mix of families and races and abilities. Scholarships are readily and openly available, and when I left, a mentally disabled woman swapped my locker key back for my Y card and told me to have a nice day. At any given time on any given day, I think almost anybody could walk into that Y and see themselves represented in some way.

Churches likewise have to make an effort. It’s not going to happen merely by hoping for or even praying for more diversity. We have to work at it and not because we want to be hip and edgy. We can't seek diversity because it’s a buzzword or because it’s politically correct. We must work hard at diversity because we want to live out the vision of shalom that we’re given in the book of Revelation — the vision of the world as God intended it to be, where every conceivable nation, tribe, person, color, and language are represented.

We do it so that we can be like Jesus. We do it so that people can walk into our foyers, peek inside our sanctuaries, and see that yes — llike the bleeding woman and Zacchaeus and the woman at the well — their story is indeed being told.

Nancy Myers Rust is a writer living in Seattle. Mother to two and wife to one, she is the writing assistant and media manager for Brenda Salter McNeil and attends Quest Church. Her personal blog can be found here.

Courtesy Sojourners www.sojo.net. Photo courtesy Bigstock. The opinions are those of the author and do not necessarily reflect the position or policy of the Florida Conference.