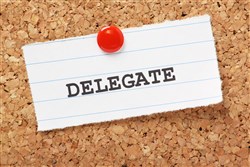 “Over the past few weeks, I have received a number of phone calls and emails from people interested in placing their names before the Annual Conference for consideration as a General Conference delegate during the second self-nomination window allowed under the Standing Rules,” reports Ken Minton, conference secretary.

This is the first time that the Florida Conference will be using this format for delegate nominations.

Click here for a brief overview of the process, as well as nomination forms for clergy and laity. The forms must be submitted in person (not online) during the Wednesday time frame.