An impromptu meeting was happening in the hallway at Coronado Community United Methodist Church (CCUMC). One member had been reading about the local school system instituting school uniforms for the first time this academic year. While research has shown school uniforms can be a great unifier for all socioeconomic groups in public schools, it’s hard the first year. Each school student needs a minimum of two pairs of pants, or shorts, and two shirts. Each uniform costs around $13, so that’s $26 per child. 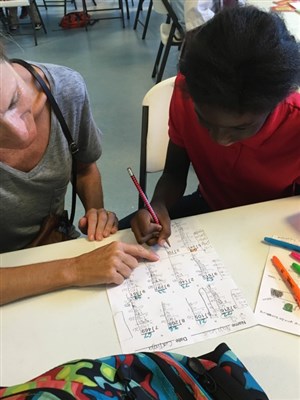 “This is going to be really tough on some of our area families,” she commented. “What can we do?”

Well, at CCUMC, we leave the building.

Earlier this year, under the direction of newly appointed Pastor Peter Cottrell and the church’s communication committee, a new campaign was begun, heralded by bright blue t-shirts boldly stating, “The Church Has Left The Building.” Months later, you’ll see those shirts every day around town: CCUMC members building Habitat for Humanity houses, feeding the homeless, handing out water bottles on 4th of July to area visitors, making cards for shut-ins and even hosting Pokemon Go events.

Coronado Community UMC members already had an after-school tutoring program at the nearby Boys & Girls Club. The church volunteer in charge of the program quietly and graciously pulled together a list of students who could be helped along with their sizes. No small chore!

A bright yellow school bus was placed in the church courtyard and congregation members were encouraged to donate school supplies or money for uniforms. The result after just two short weeks of donations was: Bags containing the appropriate size and color of three pairs of pants, shorts and skirts; five shirts, a belt, underwear and a backpack full of school supplies were distributed to 26 children at the beginning of school.

In just those three short weeks, stemming from an impromptu meeting, CCUMC was able to raise over $3,000 in funds and supplies.