The food pantry started in the back offices of the church about 12 years ago.  At that time, the pantry distributed 60 bags of food a month to families in need. Most recently, the food pantry has grown to having 30 volunteers who served 5,400 families in 2014; 5,200 families in 2015, and 1,807 families so far in 2016, according to Jim Cordwell, who supervises the pantry with his wife Barbara. They have been on board since the beginning.

“We are supported out of the community including the church’s operations budget, and financial and food support donations,” Cordwell said. “Donations come from the Women’s Club of Palmetto, Publix, mobile home parks, the mail carriers’ annual food drive, ladies’ auxiliaries and the Manatee County Food Bank Shared Food Program that allows us to purchase food at a minimal cost.

“What makes our food pantry different, we think, is that we have an open shopping concept,” Cordwell said. In the open shopping concept, pantry foods are placed on a U-shaped table and shoppers select what they need, loading their grocery bags themselves. This way, shoppers can get their own staples, fresh meat and vegetables when available, instead of receiving prepackaged filled boxes of groceries.

“Instead of us giving them food they don’t need, we give them what they do need. We are open 9 to 11 a.m. Tuesdays only and make them welcome.”
The volunteer staff estimates about 700 people are eligible for food at the pantry once a month. Cordwell said that those in need connect through word of mouth, after they see the sign outside the door and out of habit. “Some people have been coming here for years,” he said. “We serve Palmetto, Ellington, Parrish and our surrounding community,” he said. 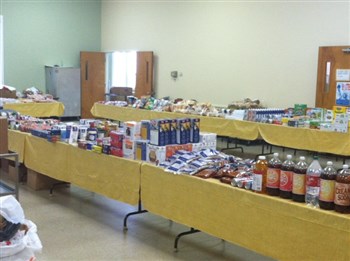 Three other area Methodist churches help the pantry, including

“The pantry really blossomed when we started the open concept shopping,” said Rev. Steve Rasmussen, church pastor. “This is a great mission and has great support from local area and churches.

“Publix Supermarkets sponsored a special April 27 free food giveaway (called) Publix Service Day providing 26 service workers from their stores who boxed foods and carried them out to the vehicles and did the whole works,” Rev. Rasmussen said.

Impressed with the church’s shopping setup, Publix decided to use the same set up from now on at all their free food giveaways, Cordwell said. At the pantry, children are given toys if the pantry has extra toys available. New Testaments in Spanish and English are available for the taking and “we have prayer warriors who will do a hands-on praying ministry with anyone who wants it,” Cordwell said.

“I’ve never seen such compassion and leadership,” Rev. Steve Rasmussen said. “It is an amazing thing. I tell everybody I am a cheerleader.”

Another church mission–Palmetto Village Thrift–started 24 years ago as envisioned by church member Virginia Smith, said Sheron Bundy, who is on the board of directors for the thrift store.

In the beginning the thrift store was housed in a small community rental. When it outgrew its first location, the congregation decided to build its own thrift store building on the church campus.

Rick Barber, a builder, engineer and member of the congregation, was knowledgeable about permits and building requirements, so he made the presentation for the project and a request for financial assistance to the Palmetto congregation and its Gulf Central district.

The grand opening of the new facility was in 2013, and now funds from the thrift store actually help with church expenses like making donations to the food pantry, paying for a roof repair and keeping the church van running, according to Bundy.

“The van they keep running is (used) for both the food pantry for food pickup and for deliveries made for the thrift store,” Rasmussen said.

“We reach out to people all the time. One woman adopted her niece and had nothing for the baby, (and there are) former prisoners have no clothes for job interviews and we give them a wardrobe at no charge. Any time we see a real need, we don’t charge. Most children’s clothes are 50 cents apiece and have been for all these years. Virginia Smith set this up and wanted to support a lot of migrant workers and make it affordable to them. We never raised the prices,” Bundy said.