What kid doesn’t like an art class? For the children in ArtWorks Orlando putting paint to paper isn’t just about having fun, it’s also about sharing their stories. You can see it most clearly in the self-portraits—brushstrokes forming sadness, fear, pain and hope.

Artist Renée Schneider started ArtWorks in 2003 as a ministry of St. Luke’s United Methodist Church in Orlando for children who live in poverty or situations of neglect or abuse. It has served about 1,000 children.

Schneider, whose father was an artist, started out in elementary education before going back to school to study communications art and design. She worked at Disney World for 11 years as a graphic designer. By then she was a wife and mother and decided to put her energy into her family life.

“But there was a relentless voice in my head, ‘You need to do something with your art,’” Schneider said.

Even though she grew up in a loving family, Schneider said she never felt like she fit in until she discovered art.

“I started thinking, if it was like that for me, what about the kids who were dealing with other issues like abuse or were in foster care,” she said. “They really must feel like they don’t fit in.”

She talked to her pastor at St. Luke’s, who encouraged her to pursue the calling. The church purchases the art supplies for the ministry, and ArtWorks also receives private grants.

Schneider began teaching at Great Oaks Village, a foster group home for children, where she was working as a volunteer. After seven years, she decided to branch out and, with the help of more than 40 artist volunteers, now teaches at about half a dozen places in the Orlando area.

The art classes are a fun activity that may not be available at their school and helps build self-esteem and confidence, she said.

“But there’s a deeper message, a visual metaphor for self-discovery. You can see that in a lot of the self-portraits,” Schneider said. “When you look at self-portraits, you are shocked at how much comes up and what they share.”

Several years ago, Howard Phillips Center for Children and Families asked her to help them publicize their events for Child Abuse Prevention Month with paintings by the children.

“They wanted to be able to share the children’s stories but can’t have them out there because of privacy issues, but they thought that their art could tell their story,” she said.

“I tell the kids they are ambassadors. ‘Your story is unique, but you have a lot in common with other kids. You are telling 1,000 untold stories. You are helping other kids and getting the message out to people who don’t know what it is to be in your shoes.’”

Through St. Luke’s ministry to East Winter Garden, she also teaches art. The community development ministry empowers the residents to make changes in their neighborhood in partnership with the church.

“So much can be done with art,” she said. “Art isn’t used for its full potential. It helps the kids see what makes them unique and special. These are beautiful kids that the world overlooks.”

Every year some of the paintings are matted and framed for exhibit at various sites including the Orlando Mayor’s Gallery, Orlando City Hall and the Visual Arts Gallery at the University of Central Florida.

“Seeing your work matted and framed and hanging in a gallery makes you feel special,” she said. “We have receptions with food where the public can meet the kids and talk to them about the art.

“Two worlds cross paths and have a meaningful conversation. People walk away and say, ‘Wow, I had no idea.’”

--Lilla Ross is a freelance writer based in Jacksonville. 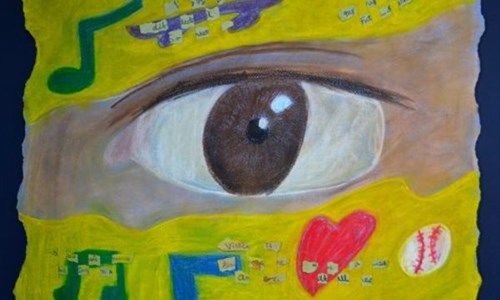 I drew a big eye peeking at external things that catch my attention. I use these things to distract me from focusing on what is important. Creating this self-portrait made me realize what I was doing. - Nate, age 16 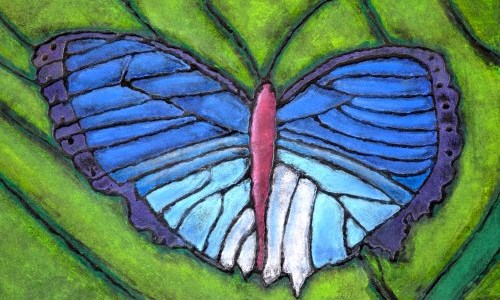 I want my wings to take me where I can be free and happy; a place where I can express myself to anyone, anytime and not stress about what is going to happen to my family. - Vickie, age 14 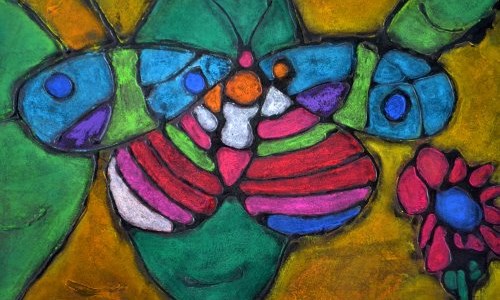 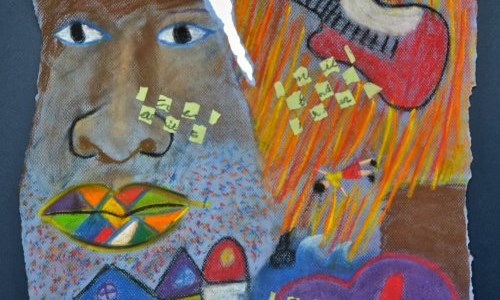 In 2010, an earthquake happened in Haiti and I was there. My sister died and I almost died. I don't understand why she died and I lived. Sometimes I just need space and time to be alone. - Billy, age 12 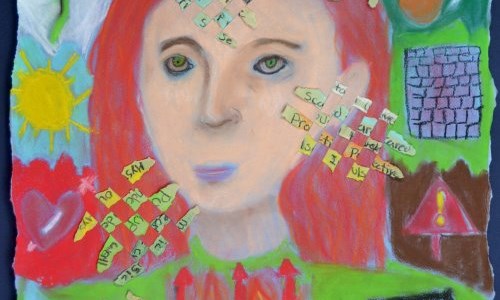 My eyes show I'm mysterious and make people figure me out. I turn sadness to anger, letting it control me. I don't like people to see the inside. This is the real me you can't know. - Denise, age 15 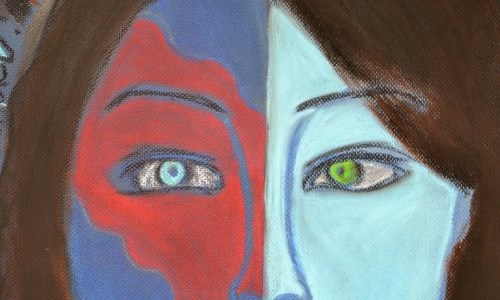 My face is divided in half, and there are two flags, one Puerto Rican and one American, on my portrait because I have parts of both countries in me. Sometimes I wonder where I belong. - Jaqueline, age 16 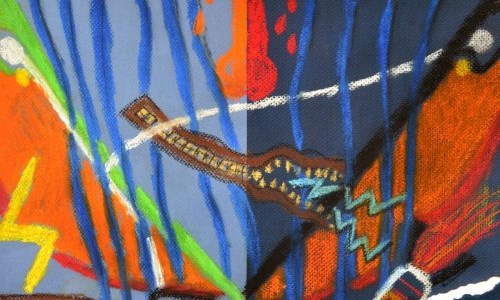 My face is half light and half dark blue because I am half good, half evil. The tears show how I am holding so much feeling inside. - Carl, age 16 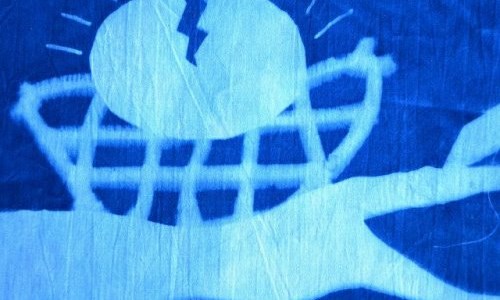 My prayer is to have a fresh start. I want to forget about the past and start all over again (inspired by Tibetan prayer flags hung in the wind to carry blessings and prayers to others). - Ellen, age 12 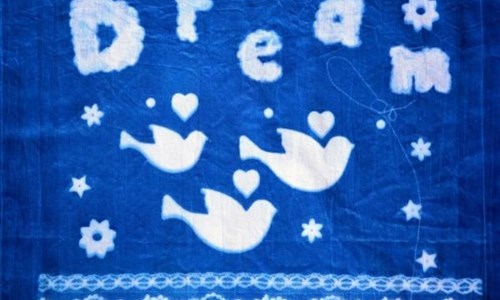 My word (on Tibetan prayer flag) is dream. I chose this word because when people go through sexual abuse, they think their life is over and that there is nothing left to live for. My wish is that they will keep dreaming and never stop, no matter what. - Lucy, age 13 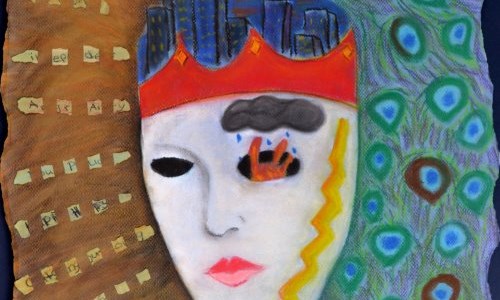 On one side of my head there is a lion's mane. On the other side there are peacock feathers. Like a lion, I am strong, brave and protective. Like a peacock, I am also very proud. - Clarise, age 17 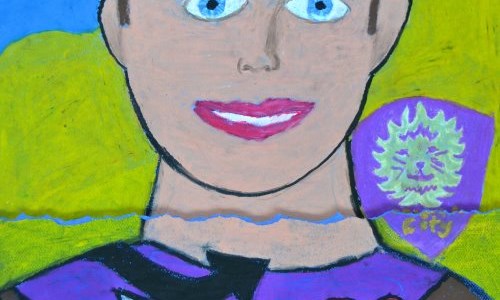 Sometimes, I feel like I need to survive. When I dream, it helps me to get away from the angry shark that tried to eat my heart. - John, age 16 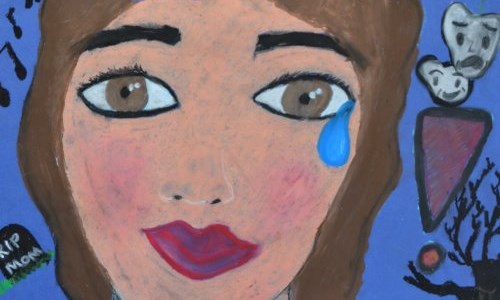 There is a teardrop on my cheek to show that even though my face is beautiful, I am still hurting every day. The sun is peeking in from the corner because I still have hope for a happy, positive future. - Francise, age 15