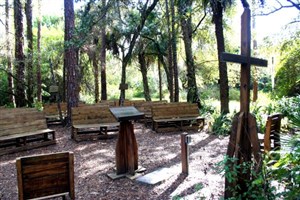 Weber will begin his ministry at Riverside Retreat on May 1 and will be telecommuting during that time. His family will join him after the school year concludes. Standifer will assume the Riverside director duties through April.

“David discovered his love for Camp and Retreat ministry as a 12-year-old at Camp Mechewana, a United Methodist Camp in Winthrop, Maine,” Standifer said.  From that week of summer camp onward, he devoted his life to growing in his walk with Christ and serving children, youth and adults through camp and retreat ministries, he added.

While a student at Grand Canyon University, David spent his summers at different United Methodist camps around the country, according to Standifer.  “After receiving his Bachelor of Science in Recreation Management, David made it his goal to become a Director of Camp and Retreat Ministries.  He has over ten years of experience in professional camping, and he looks forward to bringing his passion for outdoor ministry and experience in retreat ministries to Riverside Retreat,” Standifer said.

Weber succeeds former camp director Martha Pierce, who led Riverside for 15 years and left the position on April 1 for an opportunity to focus on environmental and social justice.