Trusting in God - United Methodists in Florida and Angola, Cuban Missionaries, and the Rebuilding of the Quéssua Mission Station in East Angola

Trusting in God - United Methodists in Florida and Angola, Cuban Missionaries, and the Rebuilding of the Quéssua Mission Station in East Angola

by Icel Rodriguez, with story illustrations from the Florida Conference’s Angola Partnership blog series by Icel and Armando Rodriguez, Kathy Steele, and Leonardo and Cleivy Garcia

When the Florida Conference of The United Methodist Church first formed a partnership with the East Angola Conference in 2004, the country, located on Africa’s southwestern coast, was still recovering from 40 years of devastating civil war after its independence from Portugal. The Methodist mission at Quéssua, near Malange, including its church, schools, and residential buildings, was in ruins. 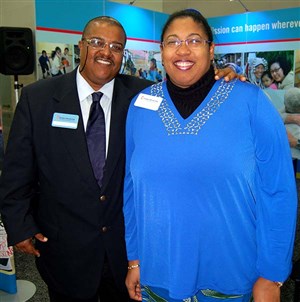 Then in 2009, my husband, the Rev. Armando J. Rodriguez, Jr., and I were assigned by the Florida Annual Conference to serve in Angola for one year. I had been hired to serve as the director of Global Mission for the Florida Conference and we needed to get to know our partners in Angola on a deeper level. So from 2009 to 2010, we served as the missionary connection for the Florida Conference in East Angola. One thing we discovered while there—for the partnership to continue to grow and be fruitful, a missionary presence was essential to coordinate work and receive volunteer teams. Not until 2016, with the easing of relations between Cuba and the United States, has Global Ministries been able to support a Cuban national in Angola.

On May 19 this year, at the 2016 General Conference in Portland, Oregon, a worship service was celebrated to commission 29 people for missionary service throughout the world. One of them, the Rev. Dr. Leonardo Garcia Salgado, from Cuba, is now being assigned by Global Ministries to serve the Quéssua Mission in East Angola. But, in fact, Leonardo and his wife, the Rev. Dr. Cleivy Benitez, have been serving as missionaries at Quéssua for the past five years, in partnership with the Florida Conference’s Global Mission office.

From Cuba to Angola

When we returned from Angola in 2010, we could see there was much physical work to be done in East Angola, rebuilding the Quéssua Mission and the church, re-establishing educational and health work, but, underlying all that was a great need to re-establish the human connection of relationship that is so important within The United Methodist Church. For many years, because of war and politics, the connection forged by God across the community of faith was also in need of repair.

My husband and I were aware that the Methodist Church in Cuba had provided missionaries for other parts of Latin America. For instance, Armando’s parents, who are from Cuba, served in Honduras to help establish the United Methodist mission initiative there. So we met with Bishop Ricardo Pereira Diaz of the Methodist Church in Cuba to determine whether God was calling Cuban missionary candidates to serve in Angola. Although Cuba is full of impossibilities, the church in Cuba has such passion and is growing by leaps and bounds. They have a passion for serving and a passion for the gospel. It was a difficult dream to make a reality because of government restrictions—theirs, ours, and the Angolan government’s restrictions—but Bishop Pereira was open to the Spirit.

Methodists in Cuba and Angola have been cooperating and working together in a number of ways. The Methodist seminary in Havana has received Angola students. In Malange, Angola, many professionals from Cuba work for the Angolan government.

Eventually God led us to Leonardo and Cleivy Garcia, a couple who would begin a new chapter in the relationship of Florida and East Angola. Leonardo and Cleivy are clergy members of the Methodist Church in Cuba and graduates of the School of Medicine and the Methodist Seminary in Havana. They had served for 21 years as medical doctors until they received the call to ministry in 2005, when they began to work with the Methodist Church in Cuba in various appointments. It took us a year to straighten out their visas to travel from Cuba to work in Angola, but that gave them time to study Portuguese.

To shore up their support, the Florida Conference asked its churches to contribute to their ministry as covenant partners, giving prayer and financial support. Some churches also pledged their presence, forming volunteer teams to work in East Angola. In 2011, the Garcias began their missionary service with the East Angola/Florida Partnership. Their initial responsibilities included teaching at the Faculty of Theology in Quéssua, overseeing the Orphanage/Boarding House, and coordinating the Florida volunteer-in-mission trips to East Angola.

Before long, the ministry roles for the Cuban missionaries began to expand. In February 2012, Bishop José Quipungo, of the East Angola Conference, appointed Leonardo and Cleivy as pastors to the Quéssua UMC. This meant they served in four areas—as teachers in the seminary, as pastors to the church, as UMVIM coordinators, and as parents—to the 45 boys who lived in the Internato orphanage.

Volunteer teams from the Florida Conference arrived two to three times a year to work in Quéssua. In November 2012, a team began work on the boys’ dorm. The boys were living in a four-room house. Once the boy’s dorm was finished, they could move into roomier quarters, and their old house could be remodeled so that the orphaned girls, who lived in Malange and commuted to Quéssua for school, could move into better and closer quarters as well.

Quéssua is for Angolans what Jerusalem was for the Israelites in Nehemiah’s time. Therefore, when the news went out that the reconstruction of the dorm had begun, people started showing up to “strengthen their hands for the good work.” Those assembled for this work included the children and youth of the boarding house, adults who received their education at Quéssua before the war, the volunteers from Florida, our Cuban missionaries, and the leadership of the East Angola Conference.

One Saturday morning, more than 500 students from the Malange high school arrived to help. One of the students said, “There are landmines in this area,” which reminded me of the three landmines that we found when my family and I lived here. However, not even fear deterred those brave ones from completing the job. While some were working on the dorm, United Methodist Women from Angola and Florida were “strengthening their hands for the good work” of starting a sewing class for the community.

During this trip, we saw hands from every corner of Angola and Florida being strengthened for the good work. As a result, we witnessed how life is emerging from dry bones. This is the fruit of intercessory prayers, actions of faith, and sacrificial giving both in Angola and in Florida. What a wonderful testimony of the unifying and transforming power of Jesus Christ!

In 2013, we received this news from Cleivy: “Leo and I hosted a delegation from the government office of the Malange Province. Among the government leaders, we hosted the Vice-governor of Malange and the financial top officer in the region. One of the greatest benefits of the visit is that three more buildings in the Quéssua mission have been hooked up to the city’s electricity: The School of Theology, the church, and the parsonage.”

Armando explains how this came about: “Before civil war destroyed the mission station, the population in Quéssua reached about 1200 students. Many of them are now high-ranking employees in the government, including military generals and ministers at the national level. They have organized themselves into an Association of Former Students and Friends of Quéssua, which diligently raises funds and helps with the logistics of every team that visits Angola. They are in constant contact with the East Angola/Florida Partnership Committee.”

In 2014, Global Ministries appointed Kenneth Koome Nkanda, a missionary from Kenya, to serve as the financial officer working with Global Ministries’ Advance funds, grants, and scholarships invested with the East Angola Conference.

Meanwhile, the reconstruction of the boys’ boarding house continued at full speed. With financial support from churches in the Florida Conference, the Angola Memorial Scholarship Fund, and the Association of Former Students of Quéssua, windows and doors were installed. The boys worked side-by-side with Leo as they dreamed of their new house. Also in 2014, the School of Theology received a grant from the General Board of Higher Education and Ministry to provide scholarships, support the Course of Studies program, and develop the theological library.

Young Angolans work with the visiting mission team members to put the physical pieces of their community back together after it was destroyed by the long civil war. But more importantly, the spiritual relationships severed by war are reconnecting through the Florida/East Angola Partnership.

In October of 2014, a small team from First UMC of Homestead, Florida, was set to travel to Angola with Sandi Goodman, Chair of the Florida/East Angola Partnership, when they received news that a terrible storm had ravaged the mission compound. They decided to go anyway to see what they could do. Angolans who love Quéssua told others that they had come all the way from America to help, even after the terrible storm. They told people in the government and a government team came to meet with them and evaluate the damage. They shared meals and decided that if the US team had come all the way from America, Angolans should do more! They agreed to replace the roof on the orphanage and the school and to meet many other needs as well, like providing wells for clean water. They kindly embraced the team and joined the work God had called it to do.

It was not about the team making a difference or in the success of the work it did. It was really about trusting God.

Later that month, the government sent a Portuguese building company to complete the reconstruction of the entire Quéssua mission. The work being done is phenomenal! Even buildings that were completely destroyed by the bombs are being rebuilt.

Ken Koome reports that the Government of Angola built six additional classrooms to create room for more students. In addition, the government rebuilt the Quéssua hospital in the mission center to bring health services closer to the communities around Quéssua. The President of Angola has committed himself and the government to help in rebuilding the remaining infrastructure in Quéssua and two more hospitals in the Lunda Sul and Lunda Norte districts of the East Angola Annual Conference.

As if all of this were not enough, on April 18th, the Quéssua mission, which was founded in 1885 to become, at one point, the largest United Methodist mission in Africa, was included in the “World Heritage List” of UNESCO!

I would like to conclude with this story from Dr. Cleivy.

“On Mother’s Day, we had a special visitor at our Quéssua church,” she reported in her 2015 newsletter. “A 101-year-old woman from Luanda, the capital, joined us for worship. This wonderful lady had asked her children for a special Mother’s Day gift—to attend a worship service in Quéssua before she leaves this world. Oh, how she rejoiced when she saw how Quéssua was being completely restored, continuing to serve the purpose for which God had brought it into existence.”

Like this young-at-heart lady, I praise God for being so very present in the lives of those that are being impacted by the Quéssua mission.