Every day, hundreds of millions of people use Facebook to share their thoughts on big moments happening all around them. Whether it’s talking about a favorite television show, cheering on a hometown sports team or engaging with friends during a breaking news event—people on Facebook connect with their friends about what’s taking place all over the world.

During primetime television alone, there are between 88 and 100 million Americans engaged on Facebook - roughly a Super Bowl-sized audience every single night. The recent "Red Wedding" episode of Game of Thrones, received over 1.5 million mentions on Facebook, representing a significant portion of the 5.2 million people who watched the show. And this year's Oscars buzz reached an all-time high on Facebook with over 66.5 million interactions, including likes, comments, and posts.

To date, there has not been a simple way to see the larger view of what's happening or what people are talking about.

To bring these conversations more to the forefront, we will be rolling out a series of features that surface some of the interesting discussions people are having about public events, people, and topics. As a first step, we are beginning to roll out hashtags on Facebook. 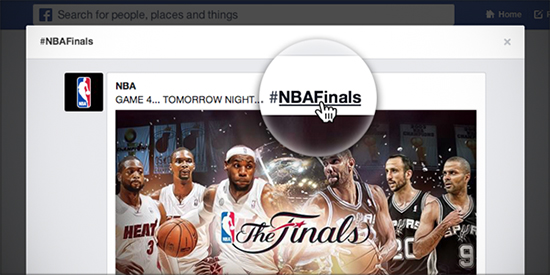 • Search for a specific hashtag from your search bar. For example, #NBAFinals.
• Click on hashtags that originate on other services, such as Instagram.
• Compose posts directly from the hashtag feed and search results.

As always, you control the audience for your posts, including those with hashtags.

Hashtags are just the first step to help people more easily discover what others are saying about a specific topic and participate in public conversations. We'll continue to roll out more features in the coming weeks and months, including trending hashtags and deeper insights, that help people discover more of the world's conversations.

Learn more about hashtags in the Facebook Help Center.