From the Angolan Bushes to Florida

From the Angolan Bushes to Florida 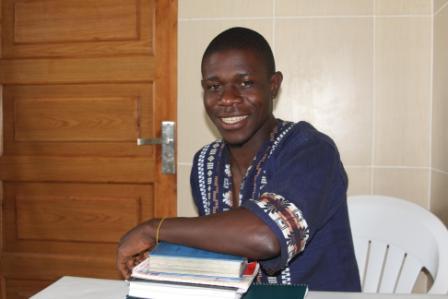 "Mom, don’t worry about us being hungry; we have been hungry all our lives and we know how to cope. Just help us to get an education."

These were the words from Jorge Mucuta, a high school student at the Boarding House in Quessua Angola, when Icel and I finished our mission term in the East Angola Conference and were heading home for good. As many other Angolan children during the long years of civil war (1975-2002), Jorge grew up extremely poor and malnourished. The guerrillas stole entire harvests, or even prevented farmers from growing crops lest they supplied for the opposing fighters.  Roots and leaves were the food of the lucky. To make matters horribly worse, Jorge’s mom was kidnapped by the UNITA guerrilla when he was a child.  After several years without news from her, she was believed to be dead. Jorge grew up on the streets, without schooling, and sometimes drinking alcohol. What kind of future can this upbringing secure!? But God’s prevenient grace was at work in his life.

As it turned out, Jorge’s mom survived the war. Jorge returned from the streets and started school at about age 12. Intelligent as he was, he went quickly through elementary school, all that was available at his small village. In those years, Jorge came in contact with the United Methodist Church and gave his life to Christ. Later, he was selected by the United Methodist Church in East Angola to move to the High School in Quessua, near Malange, to continue with his secondary education. Icel, our daughter Amanda, and I, met him in August of 2009 when we arrived in Quessua. His broad smile always brightened our days. His leadership skills earned him the respect of peers and church leaders alike. He was trusted with responsibilities in the direction of the Boarding House and in the conference. By the time Icel, Amanda and I returned to the US, he was assistant director of the Boarding House.

Because of his Christian character, his excellent academic record and his service to the United Methodist Church, Jorge received a scholarship from the East Angola/Florida Partnership of the Florida Conference to pursue Higher Education. Jorge will soon start a law career at a university in Luanda, the capital of Angola.

In another display of powerful intervention from God in Jorge’s life, last year he was granted a visa to come to the US at the invitation of the Florida Conference. From Feb 15 through April 2, 2012, Jorge will be visiting local churches and youth/young adult groups across Florida to share his powerful testimony of resilience and transforming faith, and to speak on behalf of the many students of Quessua who need our support.  For an opportunity to meet him in person, please, contact Icel Rodriguez at irodriguez@flumc.org to find out of the closest event planned for Jorge Mucuta.

If you or your church are interested in becoming a financial partner for Jorge and other students of the Quessua Boarding House/Orphanage, we invite you to consider funding education projects in East Angola through these Advances:

Advance # 100125, supports the feeding program of the East Angola Boarding House/Orphanage. $30 will feed one child for a month.
Advance # 102020, provides scholarships for East Angolan students to attend Higher Education institutions.

Make checks payable to the “Florida Conference Treasurer” and send them to:
FLORIDA UNITED METHODIST CENTER
Attn: Pam Garrison
450 Martin Luther King, Jr. Avenue, Lakeland, FL 33815
(write the Advance number on the Memo line)
One hundred percent of the Advance giving goes to the chosen project. Your contributions to the Advance are tax deductible.

Please share this blog with your friends by using the email icon in the upper right corner of the page (the icon looks like an envelope). New readers can subscribe here. To unsubscribe, send your full name and e-mail address to dataupdates@flumc.org with the subject line “Unsubscribe-Global Missions Blog.”