This summer I had the opportunity to return to East Angola for a two-week visit. What a treat this was!

After four days of traveling, I was in Quessua again. The boys, our sons, were there singing, dancing and celebrating my coming home. They had bought a huge bag of spaghetti and a chicken to feed me. What better welcoming present than that? The boys and I had two full days to catch up with what has happened in their lives since we left. Then, work began.

My responsibilities on this trip included visiting with Bishop Quipungo and leaders of the educational institutions of the East Angola UMC to hear of their successes and struggles. As partners, we want to work together, with transparency and accountability. 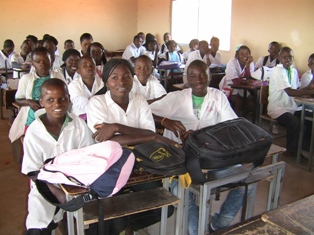 It was very encouraging to visit the Hope of Africa elementary/middle school and see how much progress they have made in a year. With their own funds they have expanded their facilities and increased the number of students to 850.

I worked with Salvador and Gomes, two students that graduated from the Quessua High School last fall, to help them transition into Africa University, Zimbabwe. They will be fully supported by scholarships from East Angola’s partner conferences in the United States, including Florida. The video below will tell you more on this project.

Finally, I was able to coordinate a visa interview at the US embassy for one of the boys, Jorge Mucuta, who is currently serving as the director of the Boarding House. Jorge is coming to Florida in February to visit local churches and youth/young adult groups across the conference. I’m sure Jorge’s testimony of resilience and faith will inspire many people in our churches.

Although the missionary couple from the Methodist Church in Cuba has not arrived in Quessua yet, due to difficulties with their Angolan visas, we hope that the situation will be resolved soon. They will be a great asset to the School of Theology and the Boarding House. With their presence in Quessua, the Florida Conference will be able to continue sending mission teams to East Angola.

Let us continue in prayer for our brothers and sisters in East Angola as they also intercede on our behalf.

Sorry!! Your browser does not support this video format