June 01, 2015
Some of you know that last December I was referred to an oncologist to follow up on three suspicious small breast tumors. I decided to seek medical attention in Cuba and thanks to the Angola President’s Daughter-in-law and the Florida Conference of the UMC, my trip was made possible and my medical expenses paid for. A week after arriving in Cuba and just before visiting with the head doctor of the Cuba’s Cancer Research Institute, I stopped by the Episcopal office of the Methodist Church in Cuba. That morning, Bishop Pereira and the staff gathered in prayer to intercede for my healing. I knew in my heart that something special had just happened. After many studies and comparisons with the results of the tests made in Angola, the doctor concluded that the tumors had disappeared. She didn’t have an explanation for it, but I did!

This was the first miracle in a list of divine interventions in our lives in the past few months.

Early this year, Leo was preparing the land around our house for retired Methodist pastors to cultivate, when the mission's tractor dug out two anti-tank landmines. One of the landmines got activated but miraculously didn't explode. 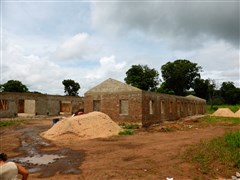 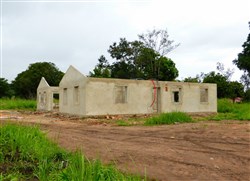 In February, while driving from Quessua to Dundo where the Annual Conference event took place, our car brakes went out. Once again, the angel of the Lord protected us from what could have been a fatal accident.

Later that month, the government sent a Portuguese building company to complete the reconstruction of the entire Quessua mission. The work being done is phenomenal! Even buildings that were completely destroyed by the bombs are being rebuilt. 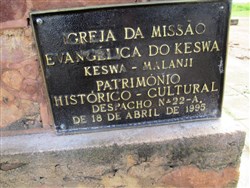 As if all of this was not enough, on April 18th, the Quessua mission (“Keswa” in Kimbundu, the local language), which was founded in 1885 and became the largest United Methodist mission in Africa, was included in the “World Heritage List” of the UNESCO!

On Mother’s Day, we had a special visitor at our Quessua church. A 101-year-old woman from Luanda, the capital, joined us for worship. This wonderful lady had asked her children for a special Mother’s Day gift: to attend a worship service in Quessua before she leaves this world. Oh, how she rejoiced when she saw that Quessua is being completely restored and continues to serve the purpose for which God brought it to existence.

Like this young-at-heart lady, I praise God for He is so very present in the lives of those that are being impacted by the Quessua mission. I thank God for your prayers and your generosity that makes possible for us to serve God’s Kingdom in this place!

Note from Icel Rodriguez: I’ll be leading a mission team to East Angola, Nov 4-18, 2015. We still have a few spaces open. If interested, contact me at irodriguez@flumc.org.